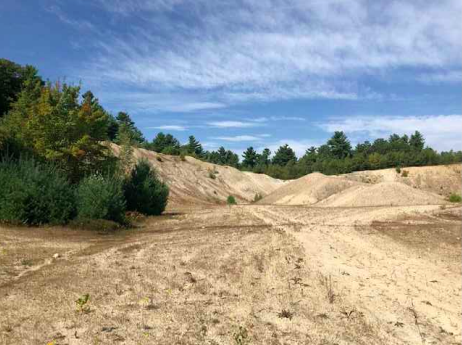 BURRILLVILLE – A proposal to build a 5 megawatt solar array on a gravel pit on Log Road has received the go-ahead from the Zoning Board of Review, with unanimous approval of a use variance for the property.

The property, a 53.5 acre lot owned by Dennis Piette, is located in an F5 farming/residential zone, where such solar projects are traditionally not allowed.

But according to a team representing developers, past attempts to create residential housing on the property have proved cost-prohibitive and unrealistic.

At a public hearing last month, Andrew Vardakis, project manager for Econox Solar, told zoners that reclamation on the property, a historic sand and gravel operation, for a five-lot subdivision would cost $2.6 million.

The Planning Board previously passed a positive recommendation for the project, which will see eight-foot high ground-mounted panels installed on 13.8 acres of the property, surrounded by fencing. Hills and slopes on the site will be stabilized, and access established from Log Road.

“Existing evergreen trees on the site will be relocated to mask abutters view when necessary,” noted that variance approval. Construction will include no blasting and “will not alter the general character of the surrounding area,” the resolution notes.

Log Road Solar, LLC, of Winchester, Mass. will have a 20 year contract for the array, with the option to extend in five year increments.

Attorney Eric Brainsky, representing owner Piette, an elderly man reportedly living in Florida, told zoners that his client has tried unsuccessfully to use other options to market the property.

Asked by zoners if approval of the use variance would open the door to similar development in F5 zones, Brainsky asserted that, “every property is different.”

Zoners granted unanimous approval with no conditions, noting in the resolution, “This approval sets no precedent.”

Town Planner Raymond Goff noted that the next step for the developer will be to apply for preliminary plan approval, a process that includes a public hearing where the abutters and other interested parties can provide input or concerns to the Planning Board. The applicant will also need to provide the board with more plan details, which include topography and engineering for the proposed land use in that stage, which has not yet been scheduled.

Goff noted that normally, it would be a 3 to 6 month process to begin construction, but that recently, COVID-19 has resulted in many timeline delays.