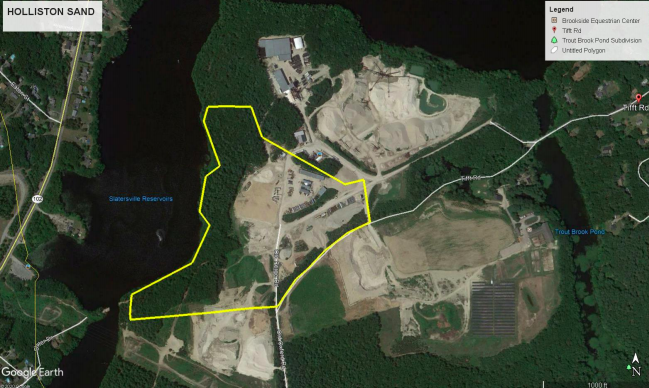 NORTH SMITHFIELD – A North Smithfield-based sand mining company has received initial approval for a 977-kilowatt solar project that the owners hope will offset some 80 percent of the business’s electrical needs.

Holliston Sand received unanimous approval of a master plan for the project on Thursday, Dec. 3, with planners also recommending that the Town Council grant the company’s request that the town abandon a portion of Tifft Road.

Developers now need to appeal to the council for official abandonment of that paper street, once the subject of a lawsuit with land-locked abutters after Holliston blocked the road in 2003. The company eventually won control of Tifft Road through an adverse possession suit, and at preliminary meetings on the project, planners questioned if access would be an issue.

“I think it’s right and correct for them to ask for abandonment as part of the project,” Town Planner Tom Kravitz said at an informational meeting on the project Thursday night.

Kravitz noted that the project is considered a major land development due to related construction of a 9,333-square-foot commercial building, where the company hopes to store equipment. The solar array will encompass 4.89 acres of a 47.39 acre lot, bordered on the west by Slatersville Reservoir.

The array is expected to generate power for on-site consumption through a net-metering system.

“Holliston Sand is an extraordinarily large consumer of electricity for the wash plants for their facility on Tifft Road,” explained John Pagliarini, an attorney representing the developer.

Holliston is expected back before the board with a preliminary plan. But first, the project will require a special use permit from the Zoning Board, permits from the Rhode Island Department of Environmental Management and review by the fire department and National Grid.

In documenting the approval, planners noted, “This positive decision reflects the Planning Board’s advisory opinion for the Zoning Board along with encouraging the Zoning Board to consider all beneficial aspects of the project in relation to increased tax base associated with Holliston Sand Company, Inc., as well as the environmental benefits of producing clean, renewable energy on site.”