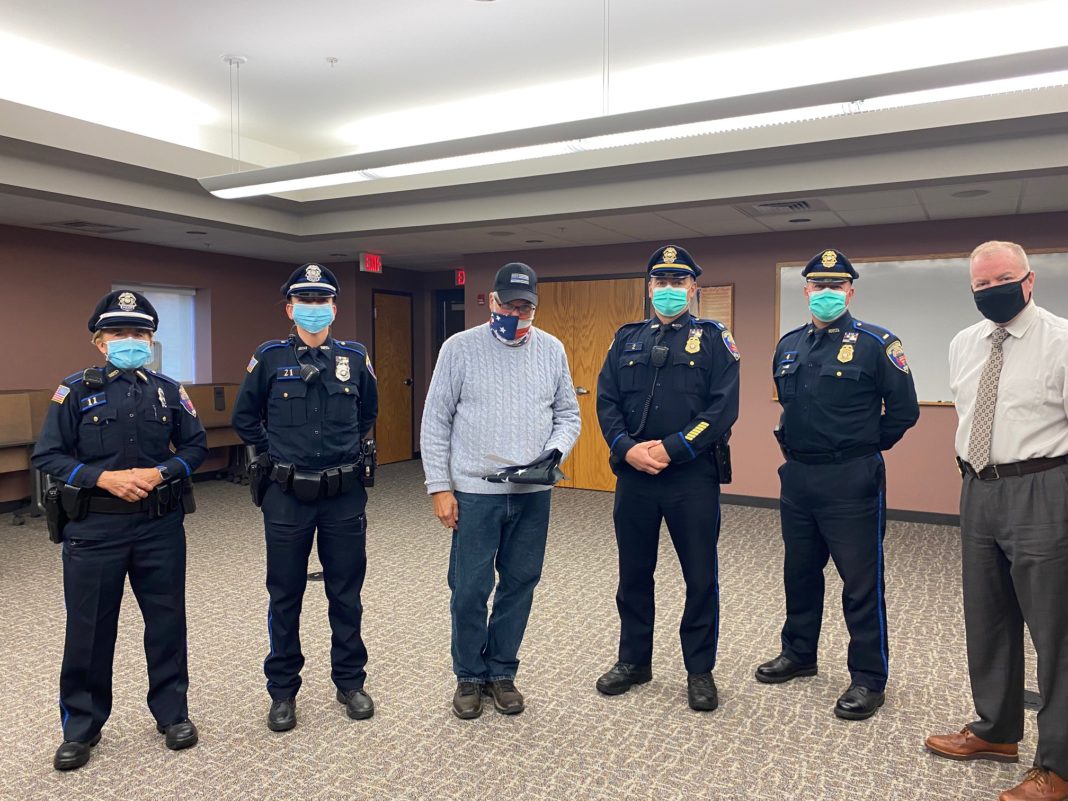 BURRILLVILLE – In Burrillville, the relationship between many citizens and members of the police department may seem a bit different than the tense dynamic that has led to protests in recent months across the country.

As Town Councilor Stephen Rawson delivered a donation to police headquarters Thursday morning, the result of a community effort last month to show support for local law enforcement, the focus was not on crime or justice reform, but rather, compassion and collaboration.

Rawson delivered $1,370 to Col. Stephen Lynch, money raised at a rally “backing blue and red,” in October that will now go to a massive, department-wide effort to help families in need over the holidays.

Rawson organized the event with Councilor Jeremy Bailey in reaction to national calls for defunding of police departments as a way to address misconduct by officers, and the deaths of black residents at their hands.

In a resolution passed in August, members of the Burrillville Town Council asserted their commitment to providing funding for those who serve the town, pointing to dozens of ways in which Burrillville’s department is part of the community, and goes, “beyond the call of duty.”

The BPD Christmas program, an effort that in 2019 provided gifts for nine town families – including 22 children – was high on the list.

“I felt it was important,” Rawson told NRI NOW at the donation drop off on Thursday, Nov. 12. “As you look across the country, this defund the police effort is still going on, unfortunately.”

The event was organized by a committee of locals including Councilor Raymond Trinque, along with residents Betty and Eric Bedard, Kelly Burns Shafer, Keith Jackson, Jim Langlois, Jerry Leveille and Jim Connell.

And Rawson said he was humbled by the community response.

“The generosity of people in this town just amazes me,” Rawson said. “It was overwhelming.”

Funds were raised at the rally through the sales of lawn signs proclaiming backing for the town’s police and fire departments, donations from businesses and individuals, and a 50/50 raffle.

Social distancing guidelines were followed at the event, and Rawson noted that around 125 people came out despite concerns about the potential spread of COVID-19, wearing masks and spreading out by the outdoor pavilion at Jesse Smith Memorial Library.

“Under those circumstances, it was a really great turnout,” Lynch said. “The community did a great job.”

“It was a great tribute,” he added.

Lynch began the BPD’s annual holiday charity when he first joined the department in 2013. The first year, the effort benefitted Toys for Tots.

But after dropping off gifts at the Rhode Island State House that year, the chief said he decided that he wanted to keep the charity local in future years.

“It didn’t get to Burrillville families,” he said.

The following year the department adopted just one Burrillville family – and the rest is history.

“The program has just grown and grown,” Lynch said, speaking in the BPD’s large meeting space. “We fill up this room now.”

Now, as the holiday season approaches each year, the chief divides his entire staff – both sworn and civilian – into teams, with each adopting two or three families.

The department receives many of the recipients’ name from the Burrillville School Department, while others come from town-based organization Between the Cracks.

Others are provided by the officers themselves.

“Once families are identified, the shopping begins,” Lynch said.

Officers pool their own money to provide gifts, not just for the children, but entire families, filling Christmas stockings and purchasing gift cards for holiday meals. Administrative Assistant to the Chief Lisa Rabideau coordinates the effort, juggling community donations and family requests.

The chief said that some of the families’ requests are surprising.

“You just want to help them meet their needs,” he said.

Once the gifts are purchased, the real fun begins.

“The wrapping of the presents is really special,” Lynch said. “The community gets involved.”

Last year, 14 bicycles, toys, games, books, sleds and sports items were among the impressive piles of presents, which also included essential items, such as shoes and winter clothing.

“It’s a lot of fun,” Lynch said, adding of the recipients, “The reactions we get… some are awestruck. Some are moved to tears.”

“It builds our relationship to the community,” Lynch said.

The 2020 effort is now getting underway, and the chief noted that the donation from the rally will likely help with the purchase of gift cards.

Rawson noted that need could be greater this year, as families face the economic fallout of COVID-19.

“I’m sure this donation will be a shot in the arm when you really need it,” Rawson said Thursday, thanking Lynch for the opportunity to organize the event.

“This town is one of the the most generous places when it comes to this,” Rawson said of the holiday drive. “It really makes this just a special place to be.”

Rawson said he has 25 of the double-sided 18 X 24 rally signs stating “Burrillville Backs Our Red & Blue,” remaining. The signs cost $10 a piece, and are still available for purchase, with proceeds to be added to the police holiday program.