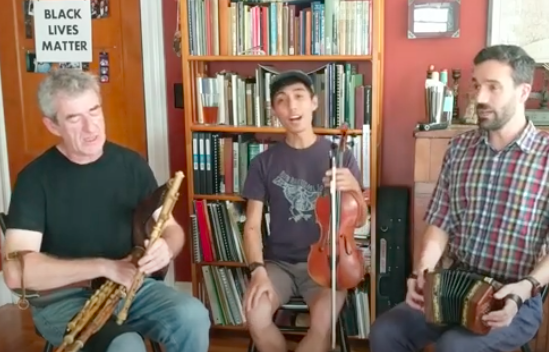 Music at the virtual farm

While the live, classical series at Grace Note Farm is suspended right now, organizers have invited their audience to catch the entertainment virtually.

A performance by internationally acclaimed folk artists Patrick Hutchinson, Armand Aromin and Benedict Gagliardi was released on Sunday and can be seen here, with music of the British Aisles, Ireland and Rhode Island. Hutchinson is performer and teacher of the Irish Uilleann pipes, with nearly forty years of experience and an eclectic repertoire that encompasses both the traditional and the experimental. He grew up in Liverpool where he had his first lessons on the tin whistle, but learned to play the pipes in Canada, a student of the well-loved Toronto piper and teacher Chris Langan. He twice won the All-Ireland title in Uilleann Pipes Slow Airs, twenty-two years apart, most recently in 2014 in Sligo. He teaches pipes for the Comhaltas Boston Music School.

Rhode Island natives Aromin and Gagliardi are seekers and singers of old songs, cultivators of local music, and chronic multi-instrumentalists.

Officials from Jesse Smith Memorial Library say they’re hoping to reopen the facility soon, and residents should watch for an announcement on their Facebook page.

In the meantime, the library is offering Grab & Go Kits at the Children’s Department, as well as Virtual Story Time and Virtual Lego Club on the social media page. Librarians have also created a “Storywalk,” along the Riverwalk behind the library. Other activities include a virtual book club, at home crafting kits and even a virtual escape room.

The Harrisville Fire District will hold an in-person meeting on Tuesday, July 14 at the Assembly Theatre with a regular meeting by the operating committee at 7 p.m., followed by their annual meeting at  8 p.m. Business includes approval of the annual fire district budget and distancing practices will be in effect.

Habitat for Humanity of West Bay and Northern Rhode Island will host the 4th annual Rolling for Homes on Saturday, July 25, where jeeps and motorcycles come together to help with a veteran build.

Riders will gather at Dan’s Place at 880 Victory Highway in West Greenwich and end at Hill’s Tavern & Grill for cornhole sets, volleyball and horseshoe, a traditional barbecue and music by Gene Harrison.

Funds raised will be used to renovate the home of a a 68-year-old, 22 year Army Veteran.

The Burrillville Planning Board will hold a virtual meeting on Monday, July 13 starting at 7 p.m . The agenda and a link to attend can be found here.

The Pascoag Fire District will hold their monthly meeting on Monday, July 13 starting at 7 p.m. The agenda and instructions to attend via telephone and submit comments can be found here.

The Burrillville School Committee will hold their regular meeting on Tuesday, July 14 starting at 6 p.m. An agenda and link to attend can be found here.

The Burrillville Sewer Commission will hold their regular meeting on Tuesday, July 14 starting at 6:30 p.m. The agenda and instructions to attend can be found here.