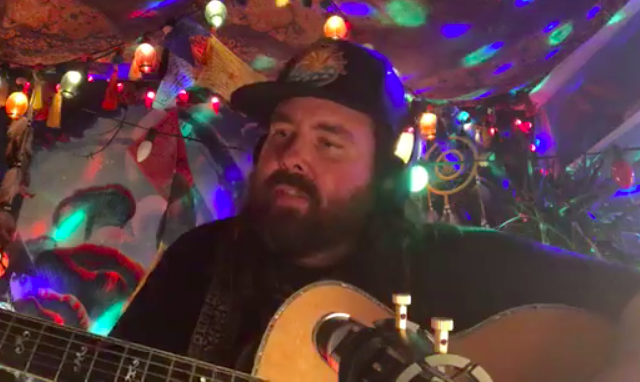 NORTH SMITHFIELD – On Saturday nights in northern Rhode Island, you will find Stefan Couture in the basement of his parents’ house surrounded by a flickering mosaic of colored lights. His own condo has noise restrictions, so this is where his Virtual Campfire is streamed to an ever growing crowd of listeners.

Why do so many people tune in? This post from a listener may say it best: “Love this guy! His virtual campfire acoustic shows make for some groovy Saturdays in quarantine.”

Couture says he began his Campfires, in part, because he was “starting to go a little nuts.”

Back in March, Couture, who also works in movie production, had just begun a contract with Netflix, and life was moving fast. But four days in, the pandemic struck.

The entire film industry shut down overnight and Couture went from 12 hour days and the buzz of production sets to an empty house and uncertainty. The first couple of weeks, he says he was in panic mode.

“As a single homeowner, I kind of freaked,” Couture said.

After unemployment and the federal stimulus kicked in, another reality of lock down came into play; it was lonely in quarantine.

The COVID-19 lock down has had a different effects for everyone. Some reacted in protest, some fell into bad habits and binge-watching; the lucky ones reunited with family and home. For Couture, his isolation led to a chance to revisit his musical roots after a very long hiatus.

“Playing music has always helped me navigate through the darkness,” he said. “If I can help others, while helping myself when performing…then that is the magic of music.”

Listeners will find a simple, direct quality to Couture’s new song, Equality, on Facebook; it pulls you in like a friend. He says he learned how to connect with his audience in the subways of Boston, busking for a constantly changing collection of commuters.

“Usually a group would have to move on, and I could play the same song again for an entirely different crowd,” Couture said.

For a songwriter, Couture says it was a great experience. Seeing all the different reactions to lyrics and delivery, he says, made it clear what worked and what didn’t.

Couture says he could tell when his words were getting through to people, and lyrics have always been a big part of why he writes. He has been inspired by all kinds of music, from jazz, to Metallica, but he says his biggest influences have come from the Beatles, Van Morrison, and Bob Dylan – musicians who Couture notes really knew how to craft a song.

Couture toured the northeast and west coast in 2001-2002 as a solo acoustic performer, selling his CD, Great Big Somewhere, out of his guitar case. Stefan Couture and the Campfire Orchestra formed in 2003 and became a known live act that built a steady grass roots following. In 2004, their album Ghost in the Rearview was voted Best Local Album and Stefan was voted Best Male Vocalist in the Providence Phoenix Music Poll.

But music is a labor of love that the artist says also takes a toll. When he hit 30 and his friends began getting married, Couture says realized he needed to create a more solid base for his own life. He’d worked a lot of different jobs, but none of them made sense until the fateful day that a hot dog cart changed his life.

True story: a production company was filming Richard Gere’s movie, Hachi: A Dog’s Tale, in Woonsocket, and they needed a cart for a prop. The RI Film office put out a call and Couture just happened to have one.

He says he felt at home on the set, and began picking up odd jobs. The odd jobs turned into a career after he joined the International Alliance of Theatrical Stage Employees union as a stage hand in film and TV.

It was work that put all of his skills to use, and it felt good to be part of a thriving industry. He became booked solid with studios that included HBO, Warner Brothers, Hulu, and Fox Searchlight.

Lew Place, location photographer and video editor at the RI Film Office, said that that Couture has a good reputation in the biz. His parents live not far from Place, on North Main Street in Slatersville, and Place knew Couture’s dad.

“His folks are nice people, that’s probably why Stefan turned out so well,” Place said.

It is perhaps this quality that draws listeners to Couture’s Virtual Campfires week after week – his friendly enthusiasm is infectious. When Couture got in touch with old friends, an audience responded that he hadn’t realized was there. After the Campfires began streaming, a new crowd of fans began tuning in.

Couture notes he’s been battling the same demons familiar to many, isolated as the world reacts to COVID-19.

“It’s been lonely, and sad, and tough to get motivated,” he said.

But he said the thought of connecting with people again gives him a reason to get up in the morning. Couture has been doing his own graphics and promos, he’s put up a new website, he’s full of ideas and writing new songs.

The artist notes that the podcasts have changed the landscape of his life.

So, what happens when the pandemic lifts and work starts up again?

Couture says he’s a little worried about it, but he has no intention of stopping his Saturday night sessions.

“I might switch to every other week to keep it fresh, and I’m thinking of starting another band,” Couture said.

One thing seems clear: as long as Couture keeps playing, people will be listening. For listeners, the Virtual Campfire has become a welcoming hearth where they can all take a break from their worries, sit a spell, and listen to some good music.

The next live performance is on Saturday, July 11, at 8 p.m., and can be watched live at facebook.com/stefan.couture.

You can find updates and further information at stefancouture.com, and on Twitter @401StefanC