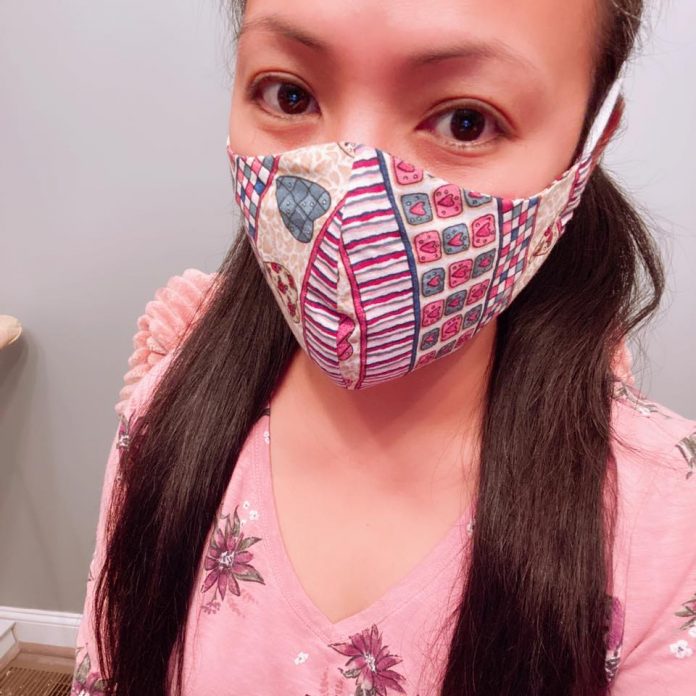 BURRILLVILLE – Around five weeks ago, when talk that people should be wearing cloth masks to curb the spread of COVID 19 first began, Maricel Rosenberg made a few for her neighbors and friends.

Using the sewing machine her husband Mark first bought her when she moved to America from the Philippines nine years ago, Rosenberg discovered that it didn’t take her long to assemble the face coverings. Supplies were easy to find at Walmart, and recipients were grateful for the help.

Rosenberg decided to continue the task, next assembling masks for co-workers at Kohl’s and Perry Blackburn, Inc. in North Providence. In turn, her boss at Perry Blackburn, Alisa Pease, gave her two weeks of supplies to assemble more.

A neighbor encouraged her to share what she was doing on Facebook. That, she said, is when the volunteer job really picked up, with offers to pay for the garments.

“That first night, all I heard (was) my messenger ding and ding,” Rosenberg told NRI NOW. “I told everyone I am not selling, just sharing.”

Soon after, a friend of her husband’s gave her three boxes full of fabrics.

“People just keep giving me supplies, so in return, I accept all requests,” Rosenberg said.

The 41-year-old town resident soon found herself making face masks for staff at Burrillville fire departments, Overlook Nursing Home, Dunkin Donuts and IGA in Pascoag. She refused to charge for the masks, and supplies began showing up at her home, with grateful recipients donating fabrics.

Her husband and two teenaged sons jumped in to help.

Rosenberg said she has now produced and gifted around 3,000 face coverings to local businesses, residents and first responders.

“We send masks to different states too,” she said. “I never stop.”

Rosenberg said she’s received a ton of support for the project – from more people than she can remember. Pascoag resident Colleen White offered to deliver the masks to people who couldn’t pick them up.

“She should be recognized for what she is doing,” White said in a note to NRI NOW. “Please say ‘thank you,’ to her and her family for making everyone safe.”

Rosenberg said that she doesn’t have a background in sewing, but learned from watching YouTube. She’s grateful to be able to use the skill to help others, and she’s still taking requests.