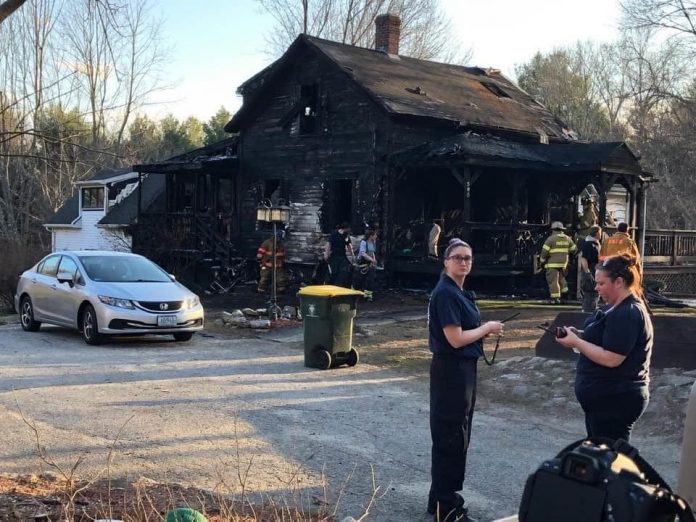 The blaze at 585 East Ave. began around 3:30 p.m. on Tuesday, April 7 and mutual aid was called in from several neighboring communities.

No one was injured in the fire, but it caused extensive damage to the house, a one and a half story single-family owned by Robert Atstupenas.

Atstupenas and his wife Barbara are the long-time owners of the North Main Street diner, and are well known in the community. A Marine veteran, Atsupenas closed the restaurant in March after the state banned dine-in services at restaurants in Rhode Island to curb the spread of COVID 19.

Keith McCarthy, an off-duty Burrillville Police dispatcher, was driving by the home and spotted the fire, taking quick action not only to call the fire department, but also to help save the homeowners and their pets.

According to Oakland Mapleville Fire Chief Joe Bertholic, McCarthy walked up on Barbara trying to extinguish the blaze with a garden hose.

“He made her put down the hose and get away from the fire, then went inside to take out the husband and two pets,” Bertholic said.

Firefighters from Douglas, Mass. and Chepachet helped with the town fire districts’ response to the blaze. Bertholic noted that there was less of a need to call in neighboring communities because a large number of volunteers showed up, a surprise he said may be one unexpected consequence of efforts to curb spread of the coronavirus.

“We’re normally light on manpower at that time of day, but right now, volunteers are more available,” Bertholic said.

The chief said the blaze was under control just before 5 p.m., although firefighters didn’t clear the scene until around 8 p.m.

The fire is believed to have started on the outside front porch, but fire marshals are still investigating the cause.

Atsupenas’s sister, Sherrie Osgood Lemay, has put together a fundraiser to help the couple, who she said have lost all of their belongings.

“He has given a lot to the Woonsocket community through his restaurant on North Main Street,” Lemay said. “They are left with only the clothes on their back and their dogs.”

A page to raise funds for the family garnered more than $4,000 in donations in one day and reached a goal of $10,000 by the weekend. The money, Lemay said, will be used for clothes and essentials.

The couple will also opened their business at 77 North Main St. for takeout on Thursday, April 8 and supporters asked the community to pitch in by ordering food.

Homeowners along East Avenue, Steere Street, Colonial Drive, Mill Pond Road, North Hill Road, Stewart Court, and Park Avenue in Burrillville were advised that the effort to extinguish the fire may have stirred up sediment in water pipes. Anyone with tinted water is advised to run their faucet until it becomes clear.