NORTH SMITHFIELD – Students in one class at North Smithfield Elementary School got a special surprise over the weekend thanks to a caring teacher determined to remind them that she’s thinking of them, even as fears of COVID 19 keep them away from her classroom.

Amy Kraus, a science, social studies and math teacher at NSES spent more than three hours driving to the homes of each of her 43 students to put up signs on their front lawns.

The message was simple: “My teacher misses me.”

“I wanted them to have something in their hand to show them how much they’re loved and cared for,” Kraus told NRI NOW this week.

And the message was far more permanent than just a quick scribble on a poster board. Kraus had the high-quality signs designed and built by North Smithfield-based National Marker, leaving a weather-proof reminder of her affection for the kids.

“They will withstand a lot,” she said. “They’re so durable. They’ll last.”

“I wanted them to have something that they could keep and remember,” Kraus said.

Her technique in delivering the gifts to her students may have displayed even more commitment.

Kraus said she wanted the signs to be a surprise for both students and parents, which meant visiting each home late at night. With the help of her husband and daughter, the teacher says she started the installation project at 8:30 p.m. on Saturday, April 4, and didn’t finish until midnight.

“We were like ninjas,” the teacher said with a laugh this week. “We were trying to be all cool and quiet.”

“We traveled through North Smithfield for hours, on some roads I’ve never even been on,” Kraus said. “It was so much fun.”

A Cumberland native who has worked for the district since she was hired as elementary-level special education resource teacher in 1999, Kraus previously taught at the now-defunct Halliwell Elementary School. She was named as the district’s Teacher of the Year in 2013, and has since moved to North Smithfield.

Her students normally split their school day between her classes, and reading and writing lessons with teacher Carla Iadevaia. After speaking with her colleague and getting approval, Kraus also had Iadevaia’s name imprinted on the double-sided signs. 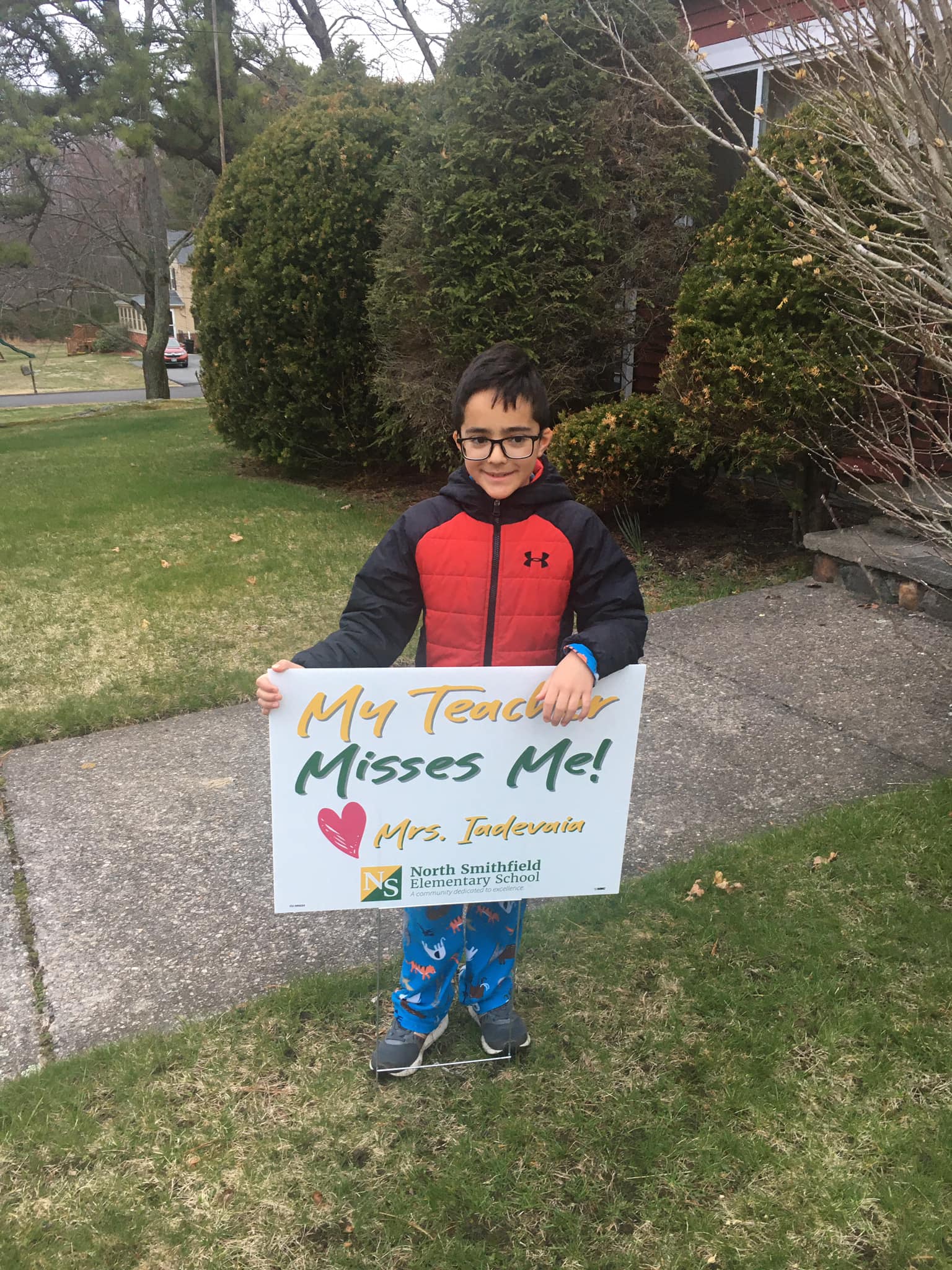 The reactions, she said, made it all worth it, with parents and students saying they cried when they saw the markers on their lawns.

“They were touched by it,” she said. “They were so excited. The feedback that I got from them was wonderful.”

“I just thought it was the sweetest thing to do,” said parent Melissa Arsenault, adding that the unexpected act came from an extraordinary teacher. “She’s just amazing. She really cares about the kids.”

“She’s been going above and beyond for these kids – even before all of this,” Arsenault added.

As distance learning plans keep students at home, Arsenault said the caring educator has also taken the time to check in on the parents.

“She goes out of her way to message each parent individually,” Arsenault said. “She really is just the best teacher.”

For Kraus, it was a needed way to comfort students separated from both their friends and their normal support networks as Rhode Island schools remain closed.

“They don’t have that right now,” she said. “I was trying to come up with a way to reach them more, because I had a sadness that I couldn’t be with them.”

“I feel like I lost that with them so I wanted them to know that we’re still bonded together,” she said.

The teacher said she’s hopeful that the gesture put smiles on the faces of her students during an otherwise stressful time, as news of a spreading virus and the resulting isolation dominates life for everyone in the region.

“I wanted something to make them happy,” Kraus said. “I wanted them to remember that I love them.”