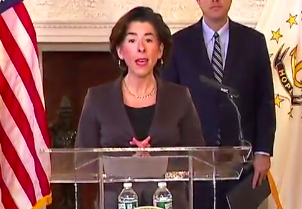 Raimondo announced that there have been four deaths in the state, ordering residents on Saturday to stay at home, and prohibiting gatherings of more than five people.

The stay-at-home order is in effect through April 13, along with the ban on dine-in restaurant eating. On Saturday, Raimondo also ordered all non-essential retail businesses  to close. Anyone traveling into the state for non-work purposes has been ordered to quarantine at home for 14 days.

Raimondo said that Rhode Islanders should only leave home for work, food shopping, buying gas or picking up necessities at the pharmacy.

The governor’s controversial policy of stopping vehicles with New York license plates, and going house-to-house in seaside communities looking for New York travelers also went into effect over the weekend.

Burrillville Police Chief Stephen Lynch said that officials are not stopping travelers at Rhode Island borders that enter town from points south as far as he knows.

“The National Guard efforts relative to New York travelers from the governor’s order is specific to the train stations, bus stations, TF Green Airport, and with local police in Rhode Island’s coastal communities at this time,” Lynch said.

Department of Health records show there have been 2,940 negative tests and 1,000 people instructed to self-quarantine. Twenty nine state residents have been hospitalized.

Of the state’s 408 cases, 63 are in Providence and 31 in Cranston, according to the figures most recently released. Northern Rhode Island communities remain relatively low, with five in Smithfield, eight in Cumberland and seven in Burrillville.

Here is the latest town-by-town breakdown, according to RIDOH: