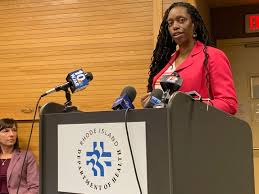 With confirmed reports in neighboring Massachusetts communities, and a report of one Burrillville man showing symptoms and visiting Landmark Medical Center, the virus that has effectively changed how people live across the globe made itself known in northern Rhode Island this week.

The Uxbridge Board of Health was notified of two confirmed cases of COVID 19 on Tuesday, March 24 and announced the news, issuing instructions to town residents. Douglas, Mass. officials received notice of their first confirmed case the same day.

Meanwhile, a report on WPRI documented the experience of one Burrillville man who showed symptoms, but has been unable to get tested.

In Rhode Island, Gov. Gina Raimondo initially declined to identify the towns where the state’s confirmed cases of the virus – which totaled 165 by Thursday – have been found.

News came out from individual communities, including an employee at CVS Pharmacy in Cranston and a student at Cranston High School West; three presumptive positive cases in Pawtucket; and an unknown number of employees who work for Lifespan, which owns Rhode Island, Miriam, Newport and Bradley hospitals.

Pawtucket Red Sox broadcaster Josh Maurer announced Tuesday that he had shown symptoms, and had self-quarantined.

Burrillville Police Major Dennis Leahey said that as of Wednesday, March 25, the department was not aware of any confirmed cases of the virus in town.

North Smithfield Emergency Management Agency Director Peter Branconnier also told NRI NOW Wednesday that there were no known cases in town that he was aware of.

Branconnier said his office has been fielding calls from area residents about what to do and who to call with concerns related to the virus. The NSEMA was also working with the town’s police and fire personnel to provide needed personal protective equipment.

On Friday, NSEMA worked with other local organizations to help to get food delivered to the North Smithfield Food Pantry.

“MREs will be delivered to help any one who needs emergency food. MREs can used for anyone who needs food to be stored for a length of time,” Branconnier said.

Woonsocket Deputy Chief Michael Lemoine confirmed with NRI NOW that there had been no known cases in the city as of last week, on Tuesday, March 17 and on Thursday, March 26, stated that as far as he knew, there were no known cases at Landmark.

And late Wednesday afternoon, the state DOH released a town-by-town breakdown showing the number of confirmed cases in North Smithfield, Burrillville and Woonsocket at “fewer than 5.” Providence and Cranston had highest numbers of confirmed cases of COVID 19, with 42 and 11 respectively.

While the number of confirmed cases in northern Rhode Island appears to remain low, the limited availability of testing may be affecting the count.

In an interview with WPRI this week, Mark McKay from Burrillville said he has been sick since Friday, March 20. McKay said his doctor told him to visit Landmark Medical Center and there, health officials ruled out the flu and pneumonia. For a COVID 19 test, McKay said he was told to contact the Rhode Island Department of Health.

DOH, in turn, told him to call his doctor.

“I’m starting to get aggravated at this point,” he said in an interview.

On social media Wednesday, other Burrillville residents told similar accounts of being unable to get tested.

Across the country, those with symptoms have been advised to simply stay home if they’re sick, and only seek testing or medical help if it’s needed.

Director of the Rhode Island DOH Nicole Alexander-Scott said in a press briefing Wednesday that the state is working on expanding testing.

Alexander-Scott said that DOH has identified locations that will serve as respiratory clinics, “by appointment only,” and the state’s testing efforts will be focused there.

“The phone call before you go anywhere is critical,” said Alexander-Scott, adding that anyone showing signs of COVID 19 should inform close friends and family members who they’ve had contact with, so they can also self-quarantine.

“The key is for people to understand, regardless of where you are, the virus in not picking places,” Alexander-Scott said.