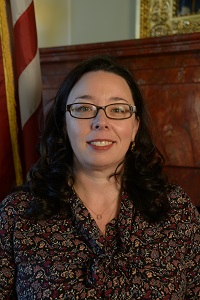 PROVIDENCE – Advocates for raising Rhode Islanders out of poverty gathered this week in support of legislation being introduced by Sen. Melissa Murray and Rep. Michael A. Morin to increase cash assistance to families in needy for the first time in nearly 30 years.

Murray, a Democrat representing District 24 in Woonsocket and North Smithfield, said, “Rhode Island Works programs helps hundreds of families throughout the state protect children and as well as helping parents gain skills for work readiness. Those 4,000 families who rely on this program receive an average of $6 per person per day.”

“We know that being in poverty can negatively impact children’s ability to succeed in school and is harmful children’s health and future success,” Murray said. “Increasing temporary cash assistance to needy families is one important strategy to help lift families, and especially children out of extreme poverty.”

Rhode Island has not adjusted benefits paid through the Rhode Island Works program since 1991, and the average enrolled family receives about $6 per member daily, which amounts to about 31 percent of the federal poverty level. Rhode Island has gone longer without raising its rate than any other New England state, and provides the lowest rate in New England.

Had Rhode Island Works rates kept pace with inflation since they were set in 1991, they would now average $1,036 monthly for a family of three, almost double what they are. The legislation is designed to ensure that Rhode Island never again allows the rate to remain stagnant as families costs rise with inflation.

“One measure of a society is how it treats its most vulnerable. Most Rhode Island Works recipients — almost 75 percent — are children. The rate they are receiving is a rate that isn’t just below the poverty level, it’s well below the level that is considered ‘deep poverty.’ Children raised in deep poverty are entering life with the odds stacked against them, with very little hope for a healthy or successful future. We can and should be doing more for the poorest in our state,” said Morin, a Democrat representing District 49 in Woonsocket.

“We have short-changed these children and families for years,” said Linda Katz, policy director for the Economic Progress Institute. “Almost every representative and senator has families receiving RI Works benefits in his or her district. This year, we will work with our coalition partners to ensure these families are front and center as the budget is developed and that a much overdue benefit increase is enacted.”

The bill was introduced in the House yesterday and is cosponsored by Reps. Anastasia P. Williams, Camille F.J. Vella-Wilkinson, Gregg Amore, and William W. O’Brien, all Democrats.

The Senate version is expected to be introduced in the coming days.