BURRILLVILLE – It was Christmas Eve 2011 when the Pascoag Utility District had a water main break, and Mike Kirkwood, the current general manager, was in the midst of his first year working for the company.

PUD officials, he said, were unable to isolate the break due to the age of the valves and pipes, and the entire system had to be shut down.

As district authorities gathered this week to celebrate some $2 million in federal funding for improvements to the water system, it’s the kind of problem, they noted, the money will help them to avert.

“We do think of this as a celebration with our partners,” Kirkwood told a crowd of local and federal officials gathered in Pascoag.

Loans and grants from the United States Department of Agriculture Rural Development will be used to complete Phase 3 of the utility company’s water improvement project, a mechanical cleaning of the interior of the existing unlined cast iron water lines. Kirkwood noted that before the project began in 2016, sediment build-up was affecting the quality of water delivered to PUD’s roughly 1,100 customers. 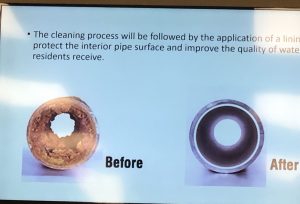 “We were getting complaints,” he said “They loved our electric company, and hated our water company.”

During Phases I and II of the project, pipes were maintained along Pascoag Main Street, and throughout central parts of the system.

“It’s greatly improved,” he said. But, “we ran out of funding during the first two phases.”

PUD will receive a roughly $900,000 grant and a $1 million loan from the federal agency to complete Phase III, with 40 years to pay back the loan. The money will be used to maintain pipes along South Main Street and Route 100, as well as a line running to the utility company’s largest storage tank.

Workers will also change valves and hydrants along the route, and put in a concrete liner.

“We don’t see the need because literally, the problem is buried,” said Reed. “The Pascoag Utility District, on its own, could not have done this.”

George Krivda, director of rural development for Rhode Island, Massachusetts and Connecticut, noted that many people don’t understand the investment that goes into such maintenance.

Sen. Sheldon Whitehouse and Rep. Jim Langevin noted that Rhode Island’s delegation fights to bring such funding to communities in the state.

“Rhode Island is known for some of the best drinking water,” said Langevin. “Great effort goes into making sure the money is there when we need it.”

Of PUD, he noted, “It’s one of the best-run public utilities not just in the state, but in the region.”

Kirkwood said that it can be difficult for small companies to obtain such funding at banks.

“They don’t want to give us more than a 10-year note, and they want you to mortgage the company,” Kirkwood said.

Now, he said, “We know we’re going to keep our customers happy for the long term.”