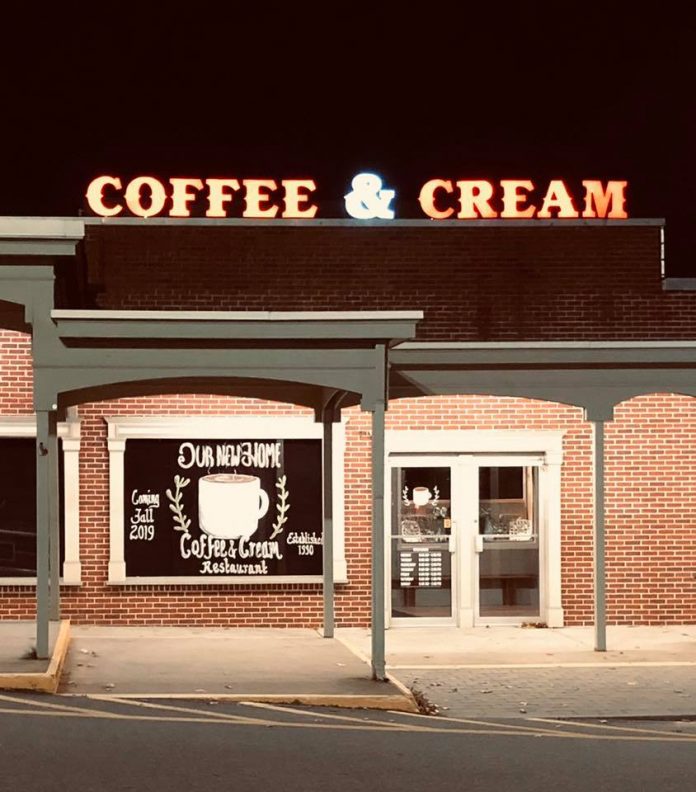 NORTH SMITHFIELD – The signs are up, the tables are set and the coffee is ready for brewing.

A popular breakfast restaurant destroyed in a fire nearly two years ago is on track to reopen in a new location very soon, with a grand opening announcement expected in the upcoming days.

Coffee & Cream owners Heather and John Branchaud obtained a victualing license for the business, slated to reopen at Slatersville Plaza, from the Town Council on Monday, Nov. 4.

After more than 20 years of serving up omelettes, pancakes and juice to hungry guests, the business was forced to close its Greenville Road location following a fire in December of 2017.

Over the past few months, the Branchaud family has been hard at work renovating a space at 900 Victory Highway that was once Pinelli’s Cucina, restoring their own original tabletops and pulling equipment out of storage. In mid-October, Richard Alan Specialty Coffees brought in the coffee machines.

And this week, a sign advertising the restaurant was added to the plaza’s marquis, and the restaurant’s iconic lettering went up on top of the building.

The new location is expected to bring back much of the same menu that diners enjoyed for more than two decades with the addition of a few new perks. The restaurant will now serve lunch until 2 p.m. daily, and down the road, has plans to add beer and wine to the menu, including morning mimosas.

“We have a few upcoming inspections and then we will hopefully be able to announce our grand opening date,” noted a social media post from the restaurant on Wednesday, Oct. 30.

On Monday, the Branchauds told councilors that they had just received approval from the Department of Health.

Councilors unanimously approved the license, clearing the path for the business to open its doors.

“I wish you the best of luck,” said Councilor Paul Zwolenski.