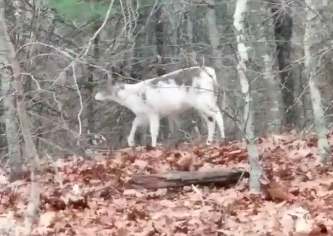 BURRILLVILLE – A rare piebald deer, mostly white in color with grey spots was seen this week in the woods of Burrillville.

Video of the deer was shared with the Wallum Lake Rod and Gun Club by one of its members.

White-colored deer are generally believed to be the result of a genetic abnormality according to wildlife experts.

The individuals who shot the video, Kerri and John Rivers of Burrillville, do not shoot it, but rather watch with awe as it passes.

Experts are split on just how rare white deer are, with some saying they make up just 2 percent of the total population. In some states, it’s illegal to kill albino deer including Illinois, Iowa, Minnesota, Tennessee and Wisconsin. In the state of Iowa deer that are 50 percent or more white are protected.

According to one expert at the University of Georgia Deer Research Facility interviewed by  a blogger on Realtree, piebald and white deer have long been the subjects of hunting myth and legend, and some believe killing them “brings a curse of bad luck during future hunts … and in parts of Europe, killing a white deer is said to ensure you will die within one year.”

In 2011, a Bellingham man shot a 100 pound white doe. He is still alive, although the success he saw in his future hunting seasons is unknown.