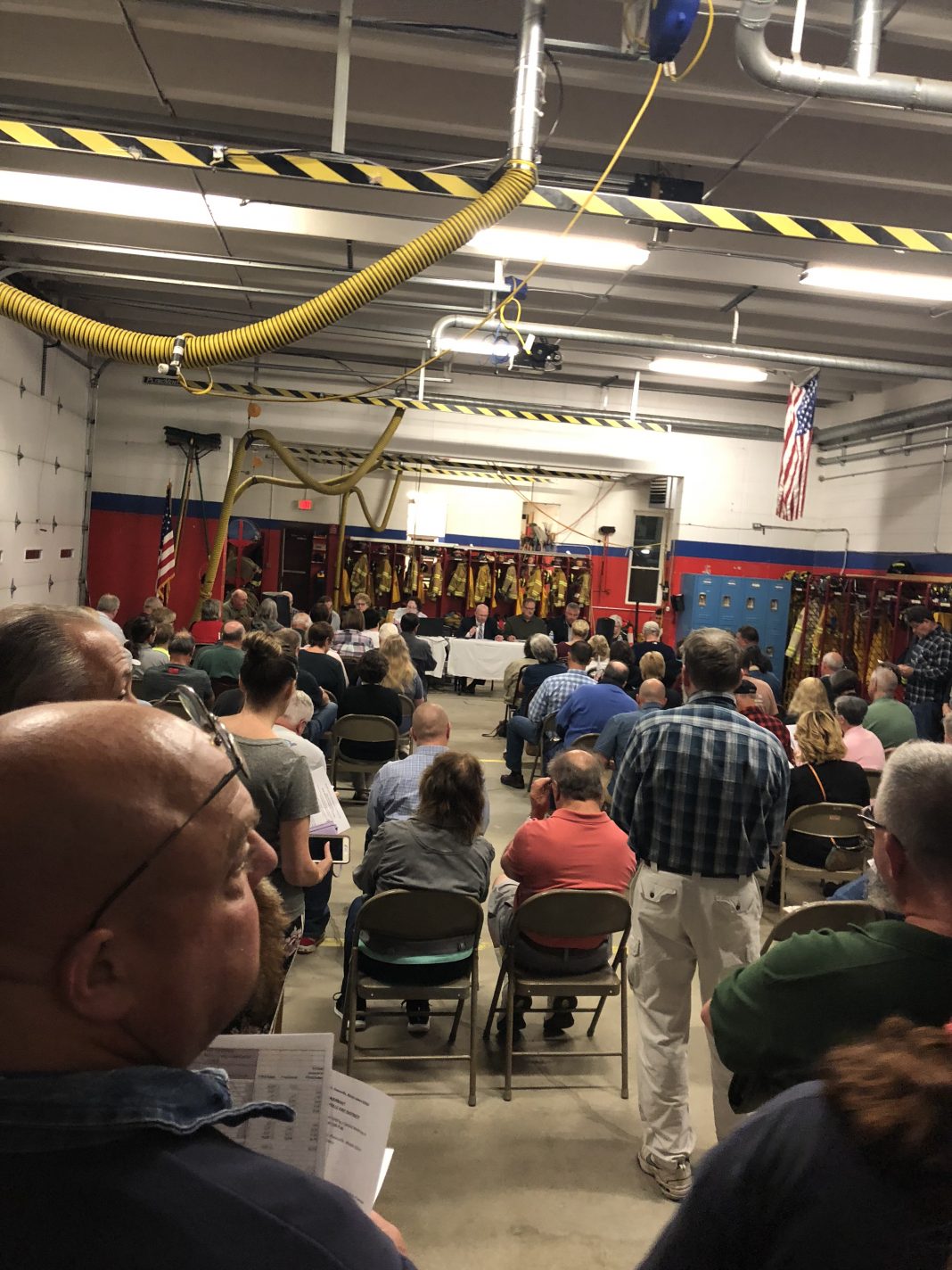 BURRILLVILLE – Given the choice of increasing their fire district taxes by more than 70 percent or decreasing the burden by more than 30 percent, residents at the Nasonville Fire District annual meeting voted 62-20 to eliminate the department’s paid staff.

The choice to effectively dissolve the union of 13 employees was presented as a “budget option” by the district’s governing board after a question and answer session. The option foresees the neighboring district of Oakland Mapleville answering Nasonville’s future calls for service.

With the vote taken on Thursday, Oct. 27, residents are slated to pay a rate of $1.30 per thousand for fire taxes, down from the current rate of $1.87. According to Fire District Committee Chairman Gerry Lapierre, the change amounts to a bill of $320.23 on the average $230,000 home.

But many questions remain. At a meeting earlier this month, Joseph Andriole, president of the Rhode Island State Association of Firefighters, said the action to put the issue before voters while union negotiations are ongoing was illegal, vowing litigation. The union has filed for interest arbitration in the matter, a process governed by a state law known as the Firefighter’s Arbitration Act.

The committee is represented by Timothy Cavazza of the Providence-based firm Whelan, Corrente, Flanders, Kinder and Siket, LLP, and he has worked on several landmark cases in the state, helping town governments to balance budgets through reorganization of labor.

Opponents of the change have questioned if the issue should go before the entire town for a vote, or if residents in the villages of Oakland and Mapleville would get a say. The Nasonville department serves a village population of roughly 4,000 residents, and is one of four independent fire districts in Burrillville.

“Tonight we’re at the crossroads for the Nasonville Fire District,” said Lapierre. “Option 1 would be working through the contract with the union.”

The subject of how negotiations broke down between that union, and members of the fire committee, was a subject of dispute. Firefighter union leader Don Pariseau said the committee had not given his group any options.

“You guys are talking about a proposal that was given, but not negotiated on. Why not?” asked Pariseau. “You haven’t tried to negotiate with us.”

Lapierre had a very different take, saying that the agreement presented by the collective bargaining group included increases in pay, overtime, healthcare and pensions.

“The union was adamant about not budging at all,” Lapierre said. “Once it was mentioned that we might go outside the district for help, they shut down the meeting.”

“There was good faith bargaining on this side of the table,” added Committee member Troy Phillips. “The union never budged from its proposal. The union declared impasse.”

Chief Joseph Bourquin has said he has had little input in the process to eliminate paid staff, first brought to light at a meeting earlier this month. On Thursday, format of the conversation was given as “questions only,” and the moderator interrupted residents who strayed from the inquiries. That format also applied to the chief, who was cut off during a discussion about volunteers.

After being dismissed, Bourquin said, “They don’t want to hear from any of us because we tell the truth.” 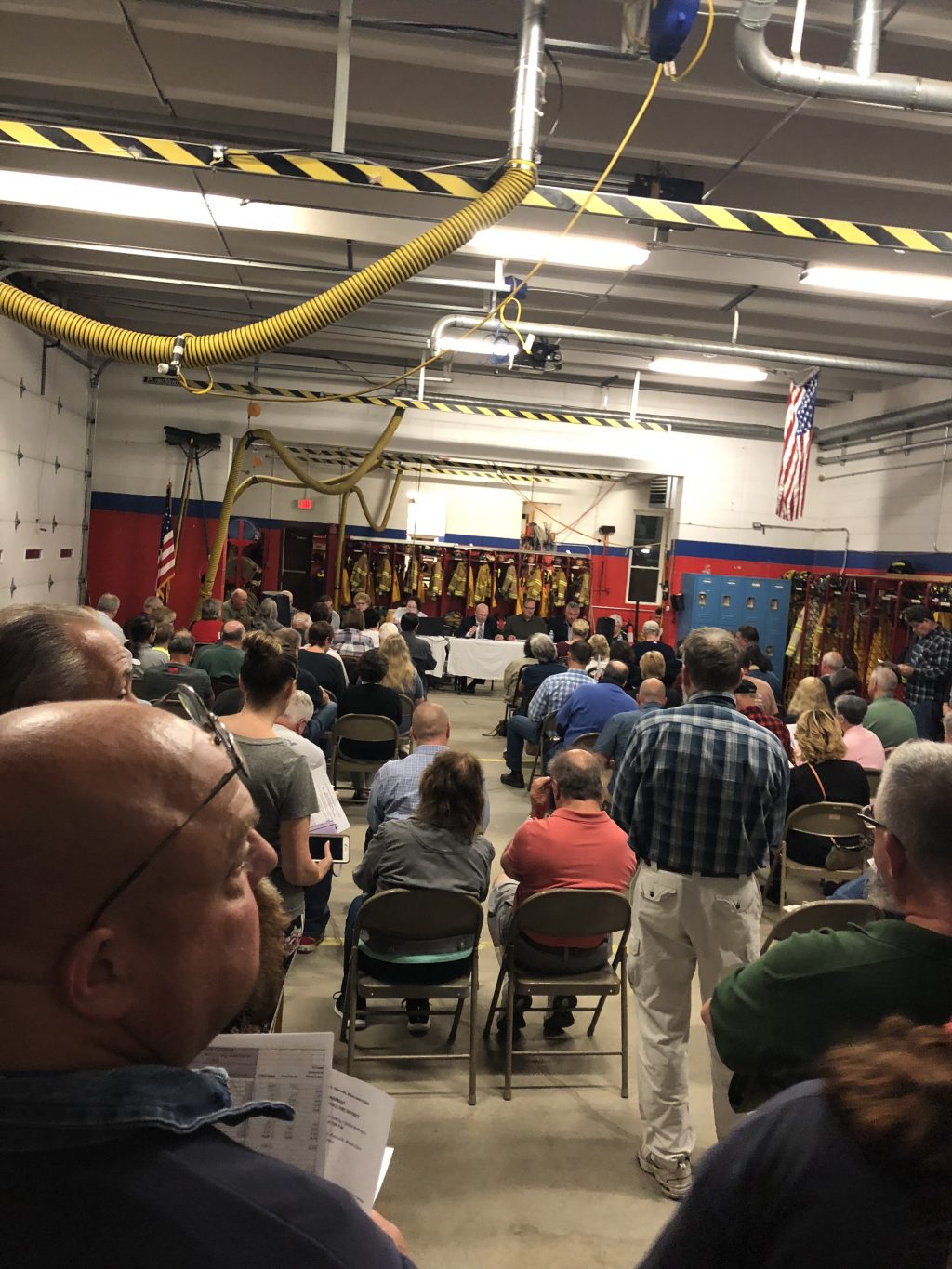 By eliminating line items including payroll taxes, unemployment, social security and Medicare, committee members told residents the district would save more than $400,000.

Two district employees – Pariseau and union President Richard Hartley – are currently on paid leave due to injuries, they noted. The cost to the district not covered by insurance for the upcoming budget year was estimated at $14,000.

Emily Dubois, whose husband serves as a volunteer firefighter, asked how the change would affect response time.

“How long is it going to take Oakland Mapleville to get there?” Dubois asked. “You’re risking everyone’s life that’s inside the building right now.”

Lapierre responded that it takes about 3 minutes and 45 seconds to get to the OMFD station.

But Bourquin disputed the statement.

“The response time answer is 14 minutes,” said the chief.

Part time firefighter Antone Souza asked the committee, “Who does this behoove? The taxpayers of Nasonville or the fire department of Oakland Mapleville because they get to make their bank accounts bigger? Who gets third party billing for rescue service calls?”

Souza noted that Philips sits on the board of OMFD. He is also a volunteer for the neighboring department, although he is a resident of Nasonville.

Committee members responded that OMFD would get the money.

A vote was called on the issue and a small group of residents in attendance was told to line up. But then, a committee member noted that the group needed to first vote to move the agenda item forward – a third choice, which potentially would have allowed voters to not approve the budget options as presented.

And it was not heard by many in attendance.

With people in the back of the room shouting, “What are we voting on?” votes were tallied from residents at the front who heard what was happening. The line to cast the main vote – between two options for the 2018/2019 budget – moved forward.

At a similar annual meeting of the Pascoag Fire District earlier this month, residents voted to table a departmental budget until last year’s financial audit could be provided, an issue that is still pending.