BURRILLVILLE – For years, Desarae Dolan and Andrea Hall have worked together toward a mutual goal: educating Burrillville residents about little ways they can live more sustainably.

It’s a collaboration between municipal employees, and staff at a quasi-municipal utility company, that has grown the town’s annual Green Festival over the past decade.

And as state agencies and other groups with an environmental focus become more involved, it could lead to the creation of several electric car charging stations right in town.

Residents will have the chance to explore the topic with an eye toward Burrillville’s potentially greener future this Saturday, Sept. 8, when several makes and models of electric vehicles will be available for test drives at the town’s 12th annual Green Festival.

The event will also include educational booths by some 30 “green” vendors, with tips for residents who would like to learn more about how to be more environmentally conscious.

Dolan, who serves as supervisor of administration for the Pascoag Utility District, gets credit for initially brain-storming the Green Festival concept.

“I had the idea when I first started here as a way to bring energy efficiency information to our customers, and interact with them,” Dolan told NRI NOW this week.

The first year, employees of the utility district baked cupcakes, and the event was held in the parking lot of the company’s Pascoag Main Street headquarters. The district serves some 5,000 electric customers in the village of Pascoag and a small portion of Harrisville.

“It was almost like an open house,” Dolan said. “We used to have it right on the front lawn.”

Each year, the festival added more vendors and soon the Burrillville Farmer’s Market became involved, moving their community marketplace to the utility company for one Saturday each year. Activities like a chili cook off and pumpkin painting made it grow in popularity.

Around six years ago, Hall was hired as the town’s director of both recycling, and Parks and Recreation, and her department got involved, eventually moving the event to the Stillwater Mills Pavilion in front of Jesse Smith Library.

“We realized we had a lot of the same goals,” Dolan said of Hall. “It made sense to partner up.”

On Saturday, guests at the pavilion will get green tips for every day life, and kids will enjoy a variety of fun, free activities including face painting, giant yard-size games and bucket truck rides. 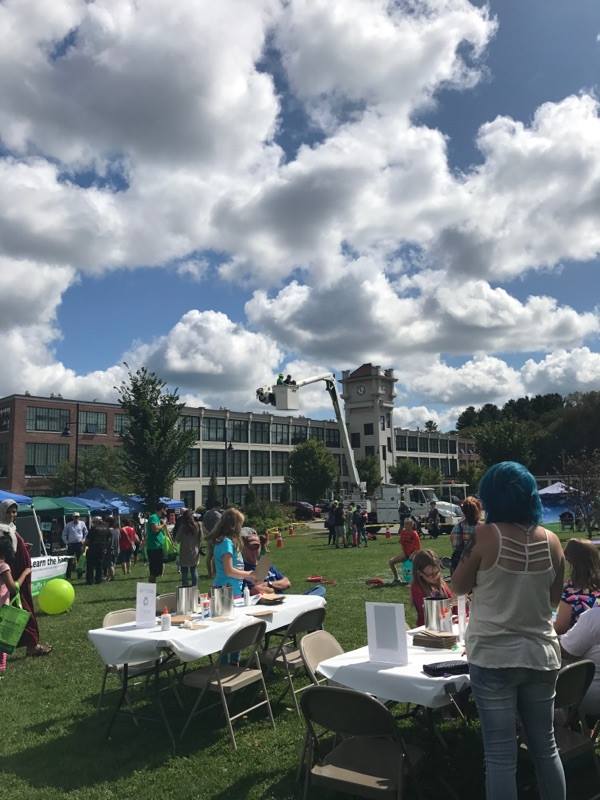 Reusable bags packed with energy saving information, recycling tips and more will be given to the first 500 attendees.

Vendors will include town groups like the Burrillville Conservation Commission and the Burrillville Land Trust, along with environmentally-focused businesses such as EcoRI News and Claude Cycles – a dealer of electric bikes.

“It’s bringing a lot of different organizations to Burrillville that people might not find out about otherwise,” said Dolan.

The Burrillville Farmers Market will also be on site with local fruits and vegetables, and  Gotta Q Smokehouse BBQ will have lunch and snacks to purchase. Local musician Jimmy Joel will provide entertainment.

But for Dolan, the highlight in 2018 is the electric car show, a feature she says she’s been hoping to bring to the festival for years.

“That’s completely new,” she said. “We’ve never done that before.”

The electric car show was developed in coordination with the Rhode Island Office of Energy Resources, People’s Power & Light, and the Rhode Island Department of Environmental Management’s Air Quality division. Models on display will come from Paul Masse Chevrolet, BMW of Warwick, and Central Mitsubishi. Vehicles slated to be on hand include the BMW i3, Chevrolet Volt and Bolt EV, and the Mitsubishi Outlander PHEV, among others.

Guests will have the chance to ride and drive the vehicles in a non-sales environment and learn how to make the switch to an electric vehicle.

“I think there’s a lot of misinformation about electric cars,” Dolan said, noting that Pascoag Utility has been working closely with state agencies and town officials to explore the possibility of building ports for the vehicles. “We’re looking into putting electric charging stations in town.”

The Jesse Smith Memorial Library will also host a Drive Green workshop in its community room during the festival. The free, 30-minute workshop, put on by People’s Power & Light, will provide information on how drivers can save on an electric vehicle with their group discount, will aim to dispel some electric vehicle myths.

Asked why the utility district promotes an environmental focus, Dolan noted that the company uses green sources whenever they can.

“I think as a public power utility we have a responsibility to the community,” she said. “We just try to be a good citizen to Burrillville.”

The Green Festival will be held on Saturday from 10 a.m. to 2 p.m. at the pavilion at 100 Tinkham Lane, Harrisville. The rain date for the event is Saturday, Sept. 22.

For more information on the free family event, contact Pascoag Utility District at 401-568-6222 x223 or the town of Burrillville Parks & Recreation Department at 401-568-9470 or visit www.pud-ri.org/greenfestival.