BURRILLVILLE – At the commencement ceremony for the Burrillville High School Class of 2018 on Friday, June 8, students reflected on time spent in the small town, and celebrated their unity as a group with some light-hearted surprises.

The 158 graduating seniors said goodbye to one another, and to their teachers and administrators, looking back on shared experience that started in grade school.

“This is not the day my life begins,” said Salutatorian Nicole Ethier. “My life – our lives – began about 18 years ago.” 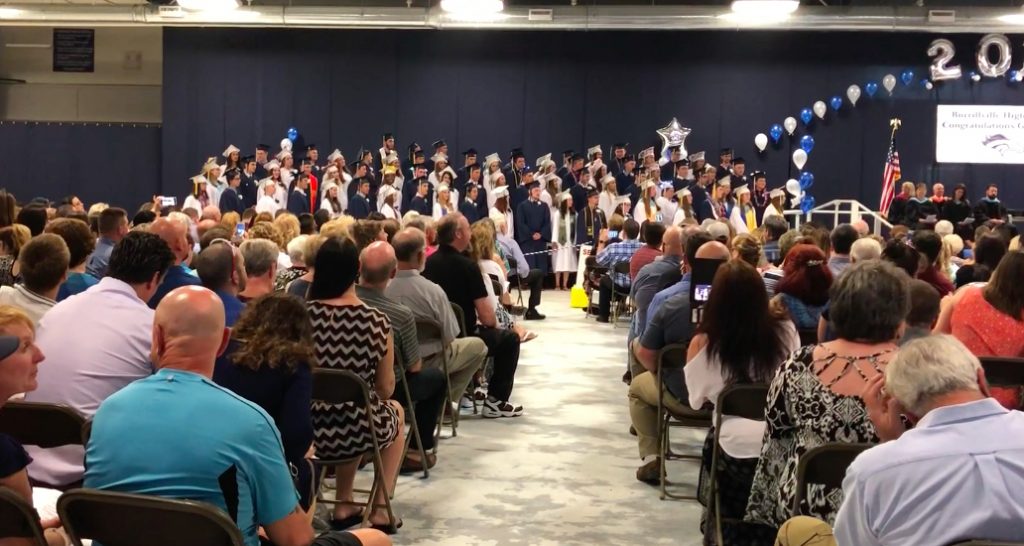 Ethier noted that their time in the Burrillville School system – starting in kindergarten – had led them to grow and change, and prepared them for the next phase of life.

“We can all appreciate that although so much has changed for each and every one of us, we are still here as one class,” she said.

Supt. Frank Pallotta advised the graduates to balance their future choices “with wisdom and logic.”

“Success will not be handed to you,” Pallotta said. “You need to have the passion to achieve, and a strong character to achieve your vision.”

Pallotta, who retires this year after nine years leading the district, also pointed to the role education will play in shaping the students’ futures. Of those graduating, 46 percent are headed off to four-year colleges in the fall and another 30 percent will attend two-year schools.

“Education allows you to control your own destiny,” Pallotta said. “Your roadmap to success must be embedded in your education.”

“This is a wonderful community and it has truly been an honor,” he said of his retirement this month.

A standing ovation for the school leader in a packed Levy Rink began with the graduating seniors. It would not be the first time the students rose unexpectedly. Midway through the ceremony, the entire class stood up one by one in a wave.

Later, while singing the school anthem, the students again showed off their unity, vocalizing together quietly until the last line of the song, which they yelled.

School Committee Chairman Mark Brizard noted that as part of the school’s annual tradition, the graduating seniors walked through hallways of the town’s elementary and middle schools before crowds of cheering underclassmen.

“This is something you won’t get at RISE Academy or at other charter schools,” said Brizard. “This is the strength of our community.”

Senior class poet Sierra Alexis Miller read her piece “Let This Not Be Our Final Goodbye.”

“Don’t wait for someday, or somebody, for tomorrow or later. Don’t wait for life to pass you by in a sea of ‘not right nows,'” Miller said.

Valedictorian Elizabeth Ethier spoke of her gratitude for having grown up in such a small, safe environment, noting that such stability is often under-appreciated.

“I know where everyone from our class lives,” Ethier said, pointing out that elsewhere, since the start of the year, there had been 23 school shootings as of May 18.

“The security that this town has provided for us is unwavering and we are lucky,” she said.

“It is not the changes that make us who we are but the stability,” said Ethier. “Appreciate the people who are constants in your life because they are irreplaceable.”

Danielle Durand and Brendan Cook received the Blue and White Award, given out in recognition of their resilience in overcoming diversity.

The Bronco Award was given to four students in recognition, in part, of their overall academic achievement, school spirit and participation at the school.  Sabrina Charron, Cassidy Dickey, Tyler Vanable and Abbey Allen received the commendation for their contributions to the school.

“These are the best kids in the world and parents, it is because of you,” said Principal Michael Whaley. “The class of 2018 is a wonderful group of men and women who are ready for the next step. They’ve put in the time and made the sacrifices that it takes to be successful.”

“What I loved about this group is their sense of togetherness,” Whaley said of the tight-knit class. “You have become part of the community that is Burrillville.