BURRILLVILLE – For the past five years, residents at nursing homes throughout town have received a small present marking each and every birthday they celebrate.

Whether pins, trinkets or a little something decorative, the handmade items are all delivered with one purpose: to let the recipients know that someone has remembered their day. They’re put together by a group of volunteers that meets monthly to make sure they never miss an occasion.

The Burrillville Sunshine Club gathered Monday at the the Beckwith Bruckshaw Lodge to assemble 31 such presents for residents at Zambarano Hospital, Bayberry Commons, and Overlook Nursing and Rehab Center. This month’s craft, pins holding polka-dotted ladybugs, would need to be glued, painted, packaged and shipped off to the three facilities.

“This whole thing started one year when Holly and I decided we were going to make presents for everyone at Zambarano for Valentine’s Day,” said organizer Sue Gaudreau. “We didn’t realize there were 90 patients.”

A retired resident who once ran a group home for the state, Gaudreau had met Holly Bisson through work. Looking to do something nice to do for town residents as Valentine’s Day 2013 approached, the pair called in reinforcements, gathering additional volunteers to accomplish the task of assembling 90 presents, and the new club was born.

Since then they’ve assembled decorative sunflowers and flower arrangements, pinwheels and pins that recipients can wear.  Bird houses made from seed packets have marked birthdays in spring, and snowmen and Santas made from paint brushes have brightened the day of December babies, all through volunteer labor. One year, the group made their benefactors cards marking every month of the year.

The challenge, Gaudreau notes, is finding crafts that can be made affordably. Gaudreau purchases supplies for the projects, hunting the internet for new ideas. The town reimburses her at a rate of $20, which comes out to less than $1 per recipient on an average month.

Gaudreau and Bisson’s dedication was acknowledged one year with a volunteer award at State House.

Until recently, the club met in the basement of the town’s Parks and Recreation building, and the new home at the lodge is something of an upgrade.

Christine Roy was one of nine volunteers to show up for Monday’s meeting.

“They’re going to love it,” Roy said of the hand-painted pins. “Just the fact that they’re getting something means the world to them.”

As their volunteer group grows, Gaudreau noted that the club may be looking for one more facility to add on to the list of those whose patients’ days they intend to brighten.

“It’s not just the people that get the gifts… it’s the volunteers too that get something out of it,” she said.

Those interested in joining the club should contact the Parks & Recreation Department at 568-9470 or e-mail us at parksandrec@burrillville.org. 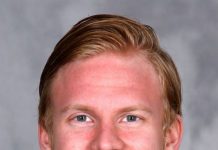 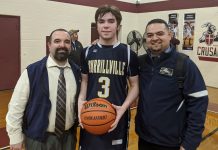 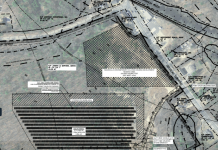