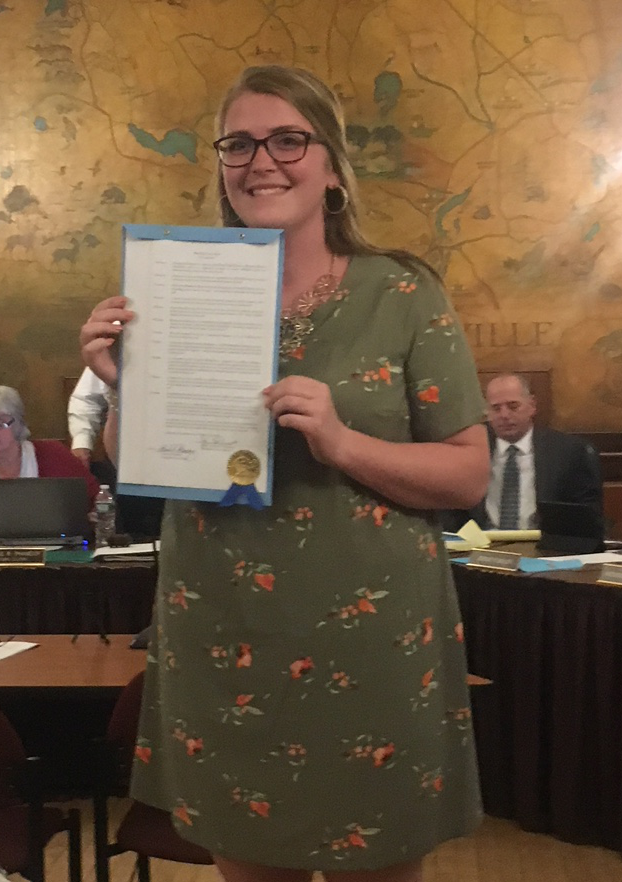 BURRILLVILLE – A Burrillville High School student has been chosen for the leadership council of the national organization Students Against Destructive Decisions, and she’s one of just five students from across the country to receive the honor.

Mackenzie Raimond, a junior at BHS and lifelong resident of the town, will spend the next year speaking publicly on issues central to SADD’s mission, while completing projects that adhere to the organization’s vision, and serving as a role model for students nationwide.

First founded as Students Against Drunk Driving in 1981, SADD expanded its mission in 1997 in response to requests from member students, and now highlights prevention of all destructive behaviors.

Raymond became involved in the BHS Chapter during her freshman year at the school and to serve on the national level, she had to complete a stringent application process. Her achievement was recognized by members of the Burrillville Town Council on Wednesday, May 9 with a proclamation in her honor.

“We have a lot of cool kids in this town…,” said Council President John Pacheco. “This might be one of the coolest things we’ve ever done.”

Pacheco noted that Raimond is a dedicated member to many different clubs and extracurricular activities at the school, and began her first year at BHS as a member of the field hockey team.

“She wanted to be involved much more,” he said.

In addition to SADD, an organization Pacheco noted has “ultimately shaped her life, morals and goals,” Raimond has been involved with the Student Council, the Debate Team, the Lacrosse Team, the community service club Varsity Athletes Against Substance Abuse, and Special Olympics through both Project Unify/Unified Volleyball at the school and at state level with the Youth Activation Committee. She volunteers time at Zambarano Hospital, Austin T. Levy School and the the St. Patrick’s Catholic Church Food Pantry.

SLC members serve one-year terms and work directly with the SADD National staff on new and continuing projects, while maintaining active leadership roles within their own local chapters.

“Mackenzie has been chosen to represent the organization because of the leadership and advocacy she has taken in the community,” said Pacheco. “We, the Town Council of the town of Burrillville do hereby thank Mackenzie Raimond for the time and talent she brings to so many aspects of town life.”