Home Around the Valley Second round of mosquito spraying to begin at 6:30 p.m. Wednesday 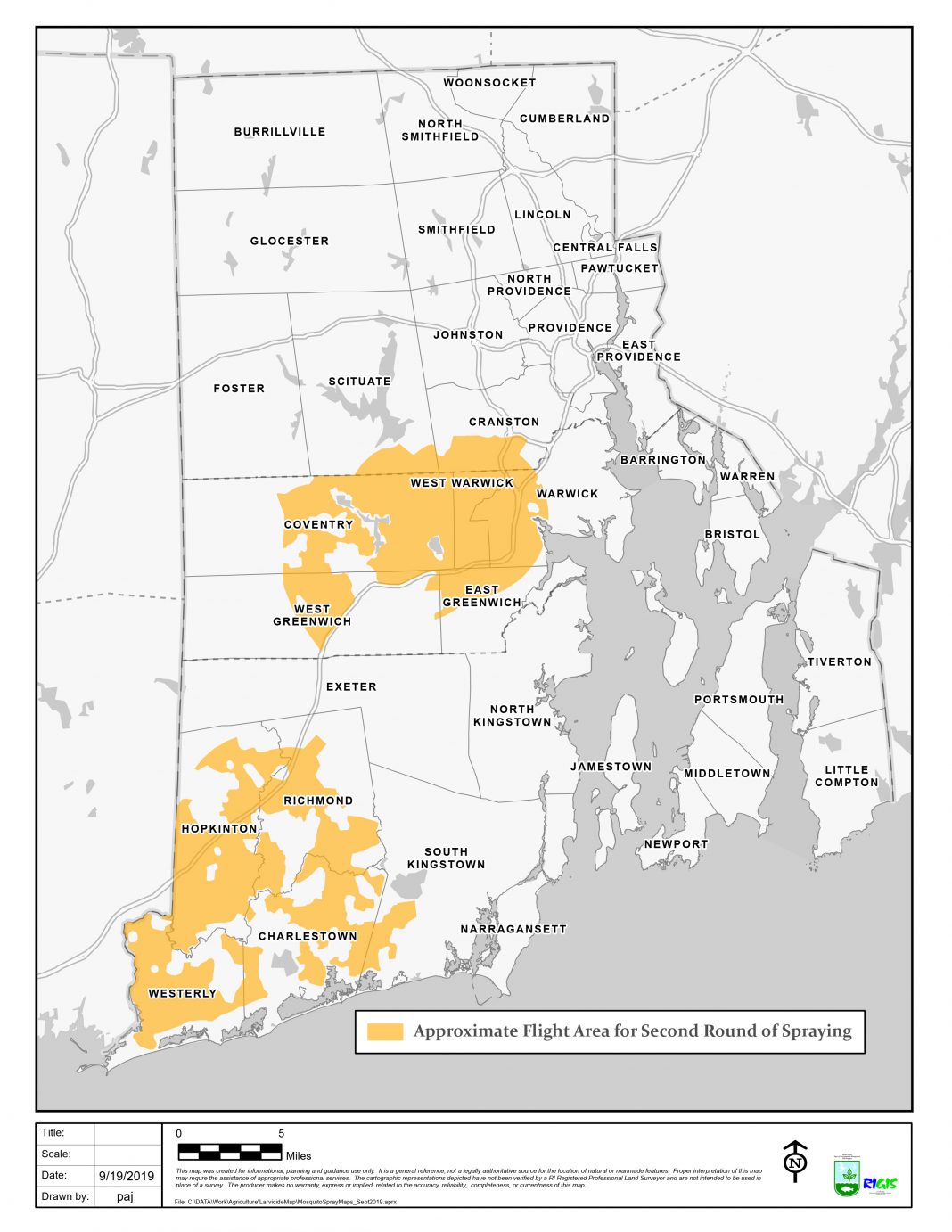 PROVIDENCE – The Department of Environmental Management and the Rhode Island Department of Health has announced that the second round of aerial mosquito treatments will likely begin on the night of Wednesday, Sept. 25, depending on weather conditions.

With favorable weather, the two planes conducting the operation should be able to treat the two spraying zones, located in the area surrounding West Warwick and the southwest part of the state, simultaneously, and finish on Wednesday.

Although spraying will not be conducted in northern Rhode Island, residents are advised to take basic precautions such as keeping pets indoors. Exposure to the chemical sprayed should be limited.

The area surrounding West Warwick includes all West Warwick and parts of Cranston, Warwick, East Greenwich, West Greenwich, Coventry, and Scituate. Some of this area was previously sprayed on September 9, but officials have expanded this zone westward to Route 102 in Coventry and both westward and southward in West Greenwich. The southwest area to be sprayed includes much of Westerly and parts of Hopkinton and Charlestown that were already sprayed on September 10. This expanded area of critical risk now also encompasses new swaths of Hopkinton, Richmond, and Charlestown as well as the southwestern section of South Kingstown, according to a release from RIDEM.

The areas to be sprayed have been identified using several factors, including information about new human cases of Eastern equine encephalitis, cases of EEE in non-human mammals, positive mosquito samples in Rhode Island and in neighboring states, and information about the habitats in which mosquitoes most readily breed. More information on health and spraying is available here. For FAQs on the impact of spraying on pets and livestock, click here. Rhode Islanders may call 2-1-1 for more information.

The areas and the two additional areas sprayed September 8 to 10 are considered critical risk areas for EEE. Aerial spraying depends on calm conditions and temperatures above 58 degrees and timing is always subject to change.

EEE is a rare but serious illness that occurs when people are bitten by infected mosquitoes. It can affect people of all ages. Aerial spraying is only one tool used to combat risk from mosquito-borne disease. The foundation of all risk reduction remains personal protection (mosquito repellent, long sleeves and pants, avoiding outdoor activities between dusk and dawn, repairing window and door screens, and dumping standing water). If possible, people should limit their time outdoors at sunrise and sunset. If they are going to be out, people should wear long sleeves and pants and use bug spray. Aerial spraying effectively reduces the risk of mosquito-borne disease but if does not eliminate the risk completely. In addition, fewer mosquitoes are active as evening temperatures get cooler, but those mosquitoes that are active are more likely to be infected with EEE.