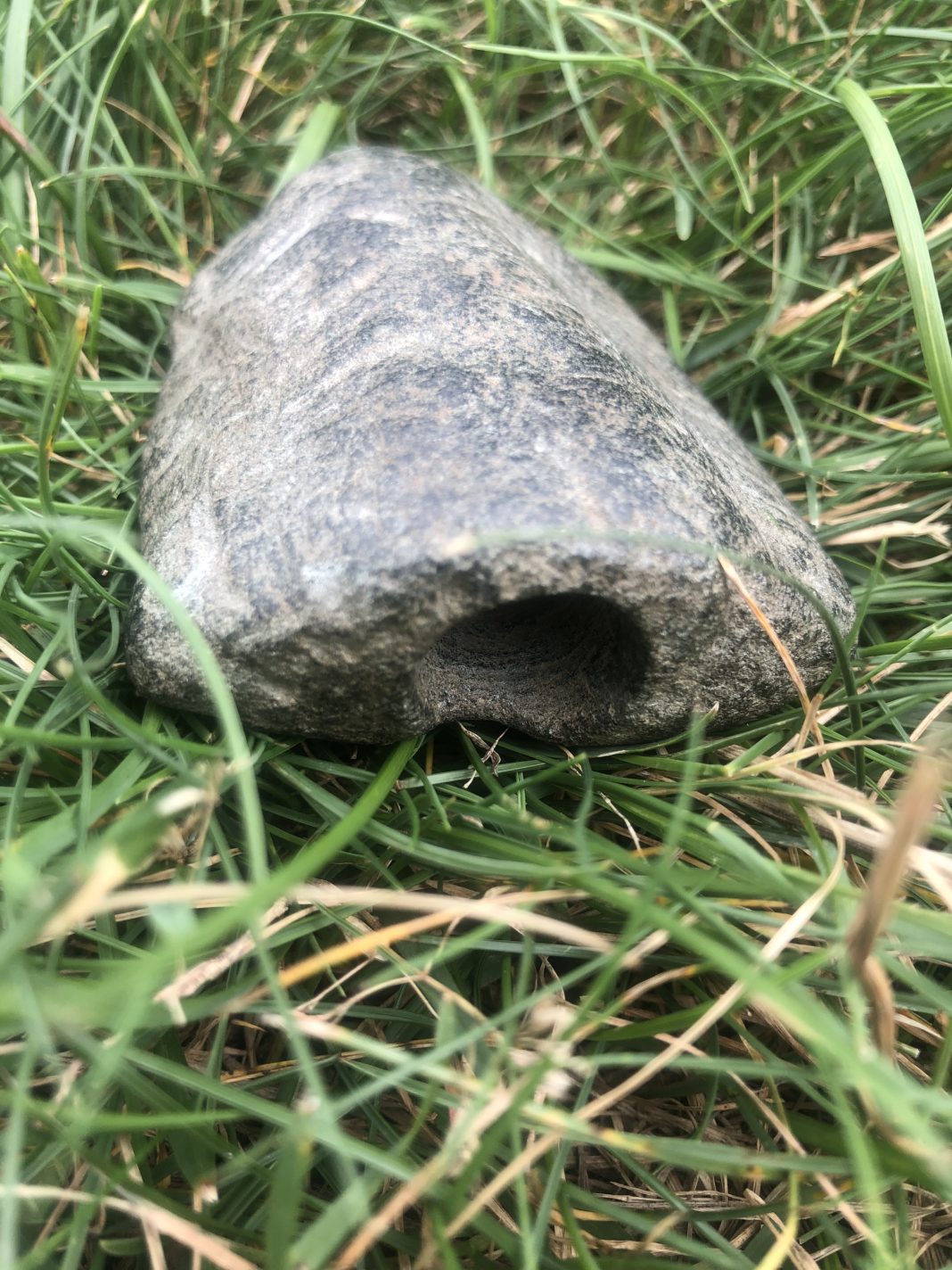 BURRILLVILLE – It was a special day, by any definition.

After eight weeks of separation, Roberta Lacey was finally able to see her daughter and her 3-year-old grandson.

The trio headed out for a hike on Sweet’s Hill, a roughly 150-acre property off of East Avenue formerly owned by the prominent Sweet family, on Monday, May 29. Dairy farmer Albert Sweet once owned more than 1,000 acres of land in the area,  at that time known as “Indian Acres.” 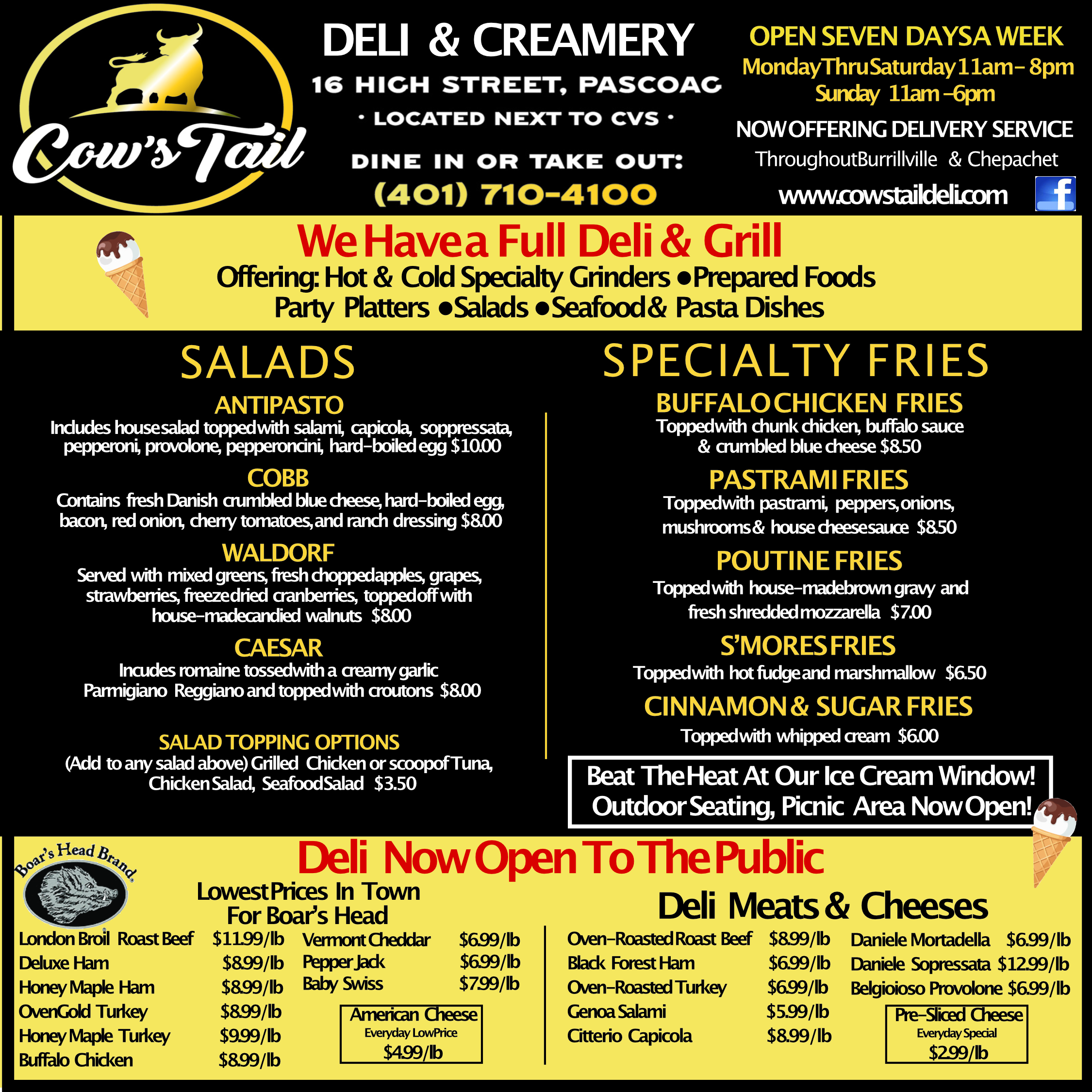 Lacey and company had not been together since March, choosing to limit their potential exposure to COVID-19. But outside, they decided, they could spend time with one another while maintaining a safe distance.

As they walked, Lacey, a Pascoag resident, pointed out various rocks, roots and other unique features along the trail.

It was a familiar routine for her and her rambunctious 3-year-old grandson: “treasure hunting,” in nature had long been a favorite activity for the pair, and it wasn’t unusual for them to return home with pockets full of rocks.

But what happened next , she notes, was anything but ordinary.

“I was showing him things on the trail, and I went down on the ground to show him the roots of a tree,” Lacey said. “I spotted a rock between the tree roots.”

Lacey picked up the rock, a smooth stone with unique markings, with a hole in the center. The rock was covered in a chalky dust, making its features, at first, difficult to discern.

Still, Lacey says she had a feeling that she had stumbled upon something special.

“It just looked different,” she said. “It was filthy, of course, and I brushed it off. It had a hole in it.”

At the time, Lacey had no idea that what she found was an archaic artifact pre-dating all of the region’s known history.

“It took me a couple of days just looking at it and turning it,” she said. “I knew when we picked it up it was something, but I couldn’t imagine what I really had found.”

Lacey began searching the internet hoping to find similar stones to no avail, before finally sending a photo of the discovery to a friend, who knew an archaeologist.

“He knew what it was,” she said, noting that the photo was shared with others in the field.

Soon, she received a text from another archaeologist, who chose to remain unnamed.

“That’s definitely a banner stone probably Late Archaic (4,000-6,000 bp) but possibly Middle Archaic (6,000-7,000 bp,)” it read. “There’s never been a really good analysis of the age of the different forms but I’m pretty sure that I’ve seen one of form similar to this from a Middle Archaic, Neville-phase grave out on Cape Cod (perhaps Carver, MA,) which was dated around 7,500 bp.”

The “bp,” designation, a scientific term for events that occurred prior to the origin of practical radiocarbon dating in the 1950s, indicated that Lacey’s artifact had sat undetected for thousands of years.

Lacey notes she initially thought the stone might be a part of the historic farm, and that it could be 400 or 500 years-old.

“Obviously, I was blown away to realize it was not hundreds, but probably thousands, of years-old,” she said.

Further research brought Lacey to the Archaic Bannerstone Project, an effort by a professor from the State University of New York to study the “aesthetically complex, anomalous ancient Native American lithics known as bannerstones,” according to the project website.

Lacey learned that Project Director Anna Blume and her team had photographed some 99 bannerstones, and only one had similar markings. 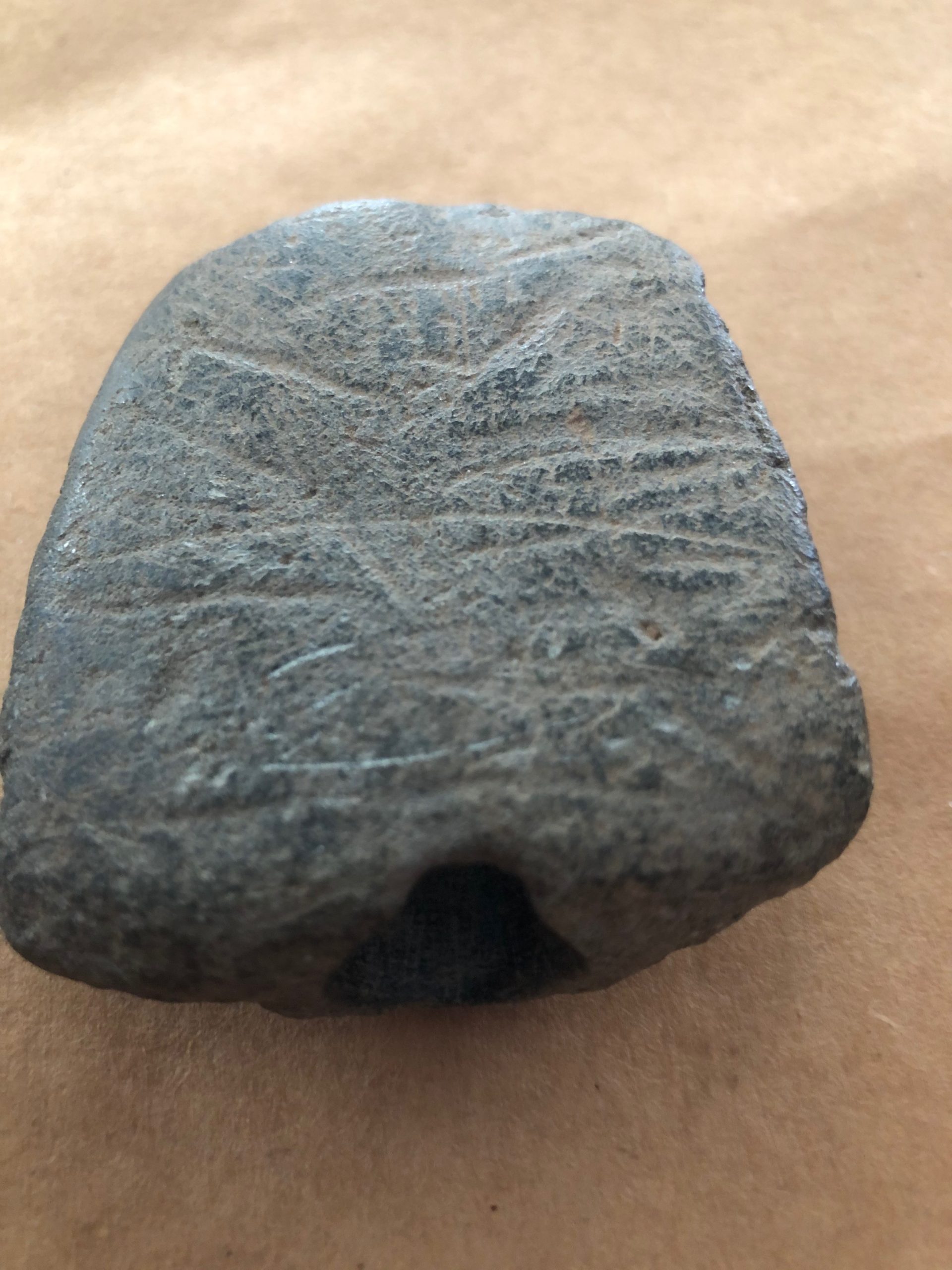 Lacey contacted State Archaeologist Tim Ives, who works with the Rhode Island Preservation and Heritage Commission, and was able to confirm the find, noting that no tribe can lay claim to the artifact because it’s so old.

“History doesn’t go as far back as this stone does,” Lacey said.

Early 20th century archaeologists believe the stones were made to be placed on staffs as banners or emblems, according to researchers, although they are uncertain about why they were made, and what role they played in the lives of ancient Native Americans. The creators used sand and reeds to make the distinct hole through the center of the stone, and some believe it was used as a counterweight for a tool known as an atlatl, used to throw spears.

Lacey notes that the stones are believed to be ceremonial, and were sometimes buried with high-ranking tribal members.

Ives, she said, was more than impressed with the find, noting that he’s been looking his whole life and “never found something so significant.” He’s agreed to give a talk about what’s known of the bannerstone’s history, and Lacey is hoping to set up an event and display at Jesse Smith Memorial Library once the facility is fully reopened.

Ives later contacted NRI NOW to clarify the statements in a letter that can be found here.

A friend is building an oak box with a glass cover to protect her find, and the self-described “treasure hunter,” hopes to visit local tribal commissions to share the discovery. She theorizes that as global warming increases the severity of the regions rain storms, similar discoveries could be made.

“It is a big thing for Burrillville,” she said. “I feel so privileged that I found this, and I want to do right by it.”

For Lacey, it seems, the timing and manner in which she discovered the rare historical artifact give it added significance, and a chance to share positive news with her community during an otherwise stressful time.

And personally, the stone marks a unique moment shared with her grandson after separation, to continue their great hunt for treasures.

“It was so symbolic, and it was really just so special,” she said. “I keep having to pinch myself. I don’t think I’ve put it down since I got it.”

Editor’s note: A clarification on this article from a local anthropologist can be found here.