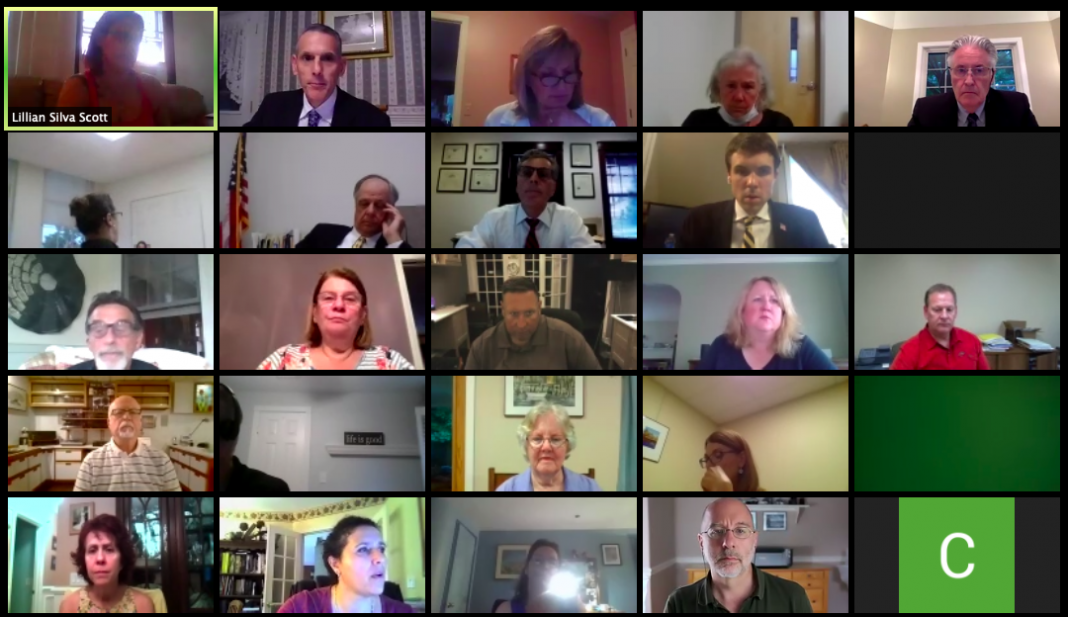 NORTH SMITHFIELD – In a move made in anticipation of a major reduction in state aid to the school district, members of the North Smithfield Town Council cut nearly $1 million from the town budget this week, instead placing the money in a contingency account.

The last-minute changes to the town’s fiscal plan were approved at the urging of Town Administrator Gary Ezovski, who noted that with some $1.5 million in school funding still uncertain as state officials devise their budget plan, the town must be prepared to sustain the district through 2021.

“We’re facing a buzzsaw here that we’ve got to face is coming at us,” Ezovski told members of the council. “We have to face this circumstance that is quite real. We need to know what we’re going to be working with July 1.”

Items in the town’s original budget that were cut during a virtual meeting Tuesday night included $25,000 for demolition of the former Stamina Mill office building; $2,500 for restorations to the historic Forestdale schoolhouse; $175,000 for a six-wheel dump truck; a $90,000 payment on street sweeper; $350,000 from a road resurfacing account; $5,000 from the food pantry budget and $150,000 initially slated to reduce the town’s pension liability.

Schools were allocated $20,701,519, with assurances from town officials that the district would be made whole if projected state aid does not come through.

The move comes in reaction to a delay in the state’s budget process due to the fiscal upheaval caused by COVID-19.

Ultimately, councilors approved a roughly $46 million fiscal plan for the town with $962,500 set aside in the contingency account, meeting the charter-mandated deadline of July 1. But decisions on the tax levy, they said, will wait, with hopes that items in the initial plan can be re-funded if final state plans do not meet the worst case scenario.

Council President Paul Vadenais noted that according to recent reports, aid to North Smithfield schools could be cut by 25 percent, or around $1.5 million.

“We made all of these cuts with one assumption: state aid is going to be cut,” Vadenais said.

The School Department had requested an increase of $810,236 in the town allocation, the maximum 4 percent allowed over the current fiscal year.

On Tuesday, School Committee Chairman James Lombardi noted that when the request was first made in December, the district was expecting a $290,596 increase in state education aid, funds they likely won’t receive as state coffers struggle to recover from money lost when COVID-19 brought the economy to a halt.

“Even with a 4 percent increase, we’re going to have to cut an additional $290,000,” Lombardi said Tuesday. “I understand that the 4 percent is a big ask.”

Ultimately, Lombardi said the department could make do with the 2.2 percent increase of $445,630 passed by councilors, as long as the town was prepared to make up for any decreases in state funding.

The Rhode Island General Assembly, meanwhile, has delayed action on its fiscal plan until after the traditional July 1 deadline, with legislators stating they will likely operate under a month-to-month plan until they have clarity on expected COVID-19 federal relief aid.

“I don’t know what the federal government is going to do,” Ezovski said. “We need some kind of flexibility to be able to work through this.”

The administrator noted that in reaction to the state delay, several communities across Rhode Island have begun eliminating raises or staffing, and are asking labor unions to defer raises for a year.

Councilor Douglas Osier noted that with the restrictions surrounding the plan to reopen public schools this fall still unclear, schools could need less funding than anticipated.

“There’s the flip side that there could be cost savings,” Osier said. “I know some schools are already starting to cut fall sports.”

“If we have distance learning next year, we don’t need $250,000 for bussing. If we don’t have sports next year, then we don’t need $100,000 in sports funding” he said, noting that if the money is held in a dedicated account, it will not affect the town’s maintenance of effort. “If things don’t happen then please, keep the money. We don’t need it.”

Vadenais noted that funds in the contingency account can be used to “backfill,” items taken out of the fiscal plan if it turns out they are not needed for schools.

Councilor Paul Zwolenski proposed additional changes to the recommended budget plan in attempt to fund trash service to residents at High Rocks Condominiums, a request presented numerous times by association member Michael Debroisse over the past year. When councilors voted against a proposal to add the 128-unit development to the town’s trash contract last year, several said they would consider funding the service during budget deliberations.

“Last fall, we led these people to feel that we were going to give them consideration,” Zwolenski said. “We’re dealing with homeowners that are not getting service, and are paying for it. They’re a cash cow for this town. We need to give them some type of service.”

“I find it really difficult to add to the trash budget when we have a school budget that could be in crisis,” Bartomioli said. “This year, with this economy, I struggle with that money going into trash removal.”

Zwolenski’s proposal to allocate around $20,000 for the service was defeated in a 3-2 vote with Osier casting the second minority vote in favor of High Rocks.

Ezovski noted that due to the state of emergency declared in reaction to the COVID-19 pandemic, the town’s tax levy dies not have to be set until August 15, giving councilors some flexibility. Cuts, he said, like the removal of schoolhouse restoration funds from the North Smithfield Historic Commission allocation, could be restored.

“We’ve all been thrilled with the work our historic commission has been able to do with that building,” Ezovski said. “I don’t want to eliminate this.”

The administrator noted that he works with the North Smithfield Food Pantry, and that while the group could use the $5,000 increase initially proposed by members of the town Budget Committee, they also could survive without the funding.

“It needs more volunteers more than it needs more money,” Ezovski said of the pantry. “At this point, this year, we have more need for every dollar that we have here. “

Vadenais and others noted the difficulty of creating a financial plan with so much uncertainty.

“We’re making these cuts on an assumption that state aid is going to be cut by 25 percent. I firmly believe that they didn’t do their job by even addressing the budget at all,” Vadenais said of legislators. “They’re relying on the federal government to bail them out.”

Vadenais noted that the town has had growth over the past year, so not all of the increases will be supported through taxes, but residents may have to wait until August to know the final numbers.

“In all seriousness, we don’t know,” Vadenais said of the estimates. “We’re in a position where none of us know where we’re going to be next week, never mind in three months, and we’re trying to do this.”

“Nobody knows the answer,” he said. “We’re chasing our tail, almost, trying to come up with the best solution when we don’t know.”