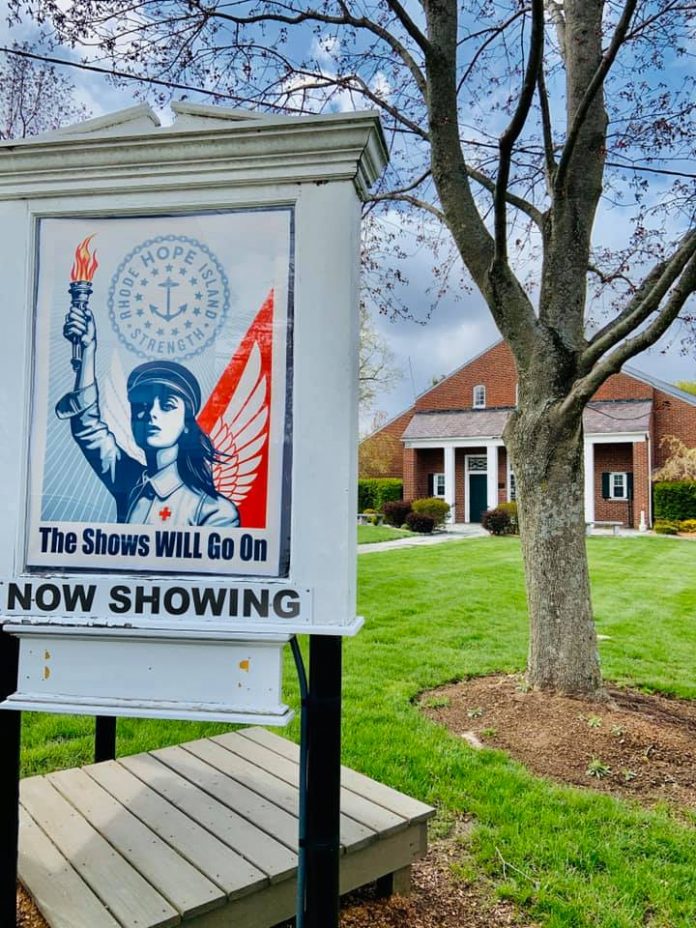 BURRILLVILLE – Artwork posted in front of the Assembly Theatre that state officials say is intended to lift up Rhode Islanders’ spirits during the pandemic had to be taken down this week, after a member of the venue’s governing board said it has Communist overtones.

Board of Administration member Donald Fox said he contacted other board members after spotting the sign in front of the Burrillville-based theater. “The sign has political leanings,” Fox said this week, when contacted by NRI NOW. “It smacks of current Chinese Communist propaganda.”

The image, designed by Shepard Fairey, a Rhode Island School of Design graduate famed for creating the design for former President Barack Obama’s “Hope” poster, was requested by Gov. Gina Raimondo. Dubbed Rhode Island Angel of Hope and Strength, the image was inspired by the state’s industrial history and intended as a tribute to first responders, according to the artist, who donated the piece.

Fairey, who inspired the 2017 Hulu documentary Obey Giant, was also the artist behind a series of Andre the Giant-inspired graffiti and sticker images that popped up in cities across New England in the 1990s.

The new work is part of Raimondo’s new RI Arts initiative, which aims to encourage Rhode Islanders to connect and heal through art, and to support the artists who have been affected by Covid-19 related closures. The RI Arts website provides a portal for residents to see and share such art, while raising funds for the Rhode Island Artist Relief Fund,

But according to Fox, the image, which is being projected onto two buildings at RISD, was ill-conceived, and has “Maoist and Bolsheviks overtones,” a reference to Chinese and Russian Communist political parties.

“There was little thought that went into it,” Fox said of Raimondo’s request for the design.

A member of the theater’s governing board through his position on the Town Council, Fox said the image is inappropriate for a space meant to advertise shows at the community theater.

“The Assembly is not a political entity,” he said.

The poster was hung by the volunteer group that operates the venue, Patrons of the Assembly. The theater has been closed since March as the state works to curb the spread of Covid-19, and according to Patrons Executive Chair & Theatrical Producer Holly Dumaine-Picard, members felt the they needed to show some sign of activity during the pandemic.

“The Patrons noticed that the kiosks had been empty for some time, so we were trying to find something to put up that would be inspirational for the community,” explained Dumaine-Picard.

The Patrons head noted that this week would have been “tech week,” for the theater’s production of Junie B. Jones the Musical, and that the opening night scheduled for this weekend has been postponed indefinitely.

“We are all pretty sad about that,” she said.

Members of the Patrons had the poster printed at East Coast Artisans with the words “The shows WILL go on,” below the image.

Dumaine-Picard she was surprised when she was asked to remove it.

“I didn’t have the background knowledge that some people didn’t appreciate the artwork,” she said. “If we had the knowledge that it could have offended anyone we wouldn’t have chosen that, but we were going off the state’s lead.”

But according to Fox, the Patrons did not have the authority to make the decision. He noted that no one voiced disagreement with an email he sent to his fellow governing board members on the issue.

“They broke the rules and put something up when they didn’t have the authority,” Fox said.

As far as the meaning or utility behind the artwork, Fox said, “People can have a debate, and I’m happy to have a debate.”

The sign was hung last week, and taken down on Monday, May 11.

Dumaine-Picard said that Assembly Board of Administration officials have asked that the Patrons collaborate with them in the future on anything going up in the kiosk that is not an art production. She said that posters honoring Burrillville High School Class of 2020 will be hung in the kiosk in the near future.